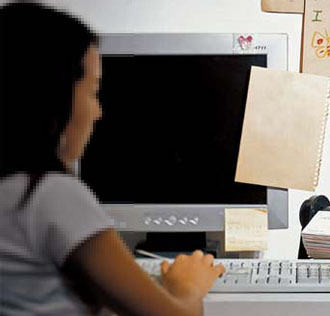 A 31-year-old female worker surnamed Kim received a phone call in May of last year from a person alleging to be a teller from a savings bank, telling her that she was entitled to a small loan of 500,000 won ($459).

The alleged teller told Kim that in order to receive the loan, she simply was required to sign up for a WiBro, or Wireless Broadband, subscription for three months, after which she could stop the service.

Kim, who was under financial distress due to her unpaid debt, did not waste time faxing copies of her identification along with subscription contracts for the wireless service.

Soon after, there was a deposit of 500,000 won in Kim’s bank account. What she didn’t expect was a notification from the phone carrier that if Kim were to cancel her two-year-contract service she would have to pay 1.8 million won in penalties and also pay for a laptop that was also provided by the carrier.

The Seoul Central District Prosecutors’ Office Sunday said it indicted a manager of a mobile phone store owner surnamed Park along with five other suspects for defrauding nearly 10,000 people, costing the two major phone carriers KT and SK Telecom 10.7 billion and 3.6 billion won, respectively, in damage over a 13-month period, from April of 2010 until May of last year.

The prosecutors also indicted another group of 10 suspects without physical detention on the same charge.

The suspects allegedly took advantage of subscription programs provided by mobile carriers, in which they hand out subsidies as well as other incentives such as interest-free installment payment plans for laptops to mobile phone stores in efforts to increase their shrinking number of wireless service users.

The authorities reported the suspects advertised online or made calls to financially-squeezed people, seeking to find potential victims and promising them their names used in subscription contracts would be replaced with those of others after the first three months, which did not happen.

The suspects who ran phone stores sold laptops that came as part of a subscription package, raking in money along with mobile phone carrier subsidies.

The investigators reported the suspects cut off their contacts with the victims after the initial three months, leaving them no choice but to keep their two-year contracts unless they were willing to pay the penalties and for the laptops.

“The victims who were deceived by the suspects now face cancelation penalties and payment for laptops that could be as much as 2 million won,” said the prosecution.