Last week, the 27-year-old daughter of a married couple in their 50s came upon a horrific scene inside her family’s living room in Changwon, South Gyeongsang.

On Nov. 7, the daughter discovered her 51-year-old mother and 56-year-old father stabbed to death in her own home. The police investigating the case later on presumed that the mother stabbed her husband to death, then killed herself.

Why would she have committed such a crime?

The mother was diagnosed with Stage 1 cervical cancer and received surgery in September to have her female reproductive organs removed. Immediately afterward she began suffering from serious depression. 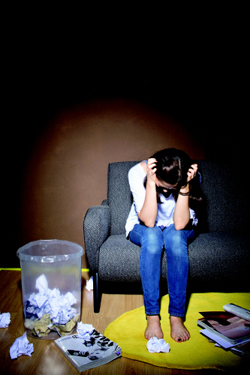 “After receiving the operation, the mother was constantly depressed, obsessed with the idea that she didn’t have a womb and often cried,” said a police official.

Until the mother found out she had cancer, the family was like any other ordinary family in Korea. The husband had his own business in the retail sector and the family did not have any significant financial trouble, the police said.

Though the quality of Korea’s cancer treatment research is considered one of the world’s best, patients are often left mentally and emotionally isolated.

Often times, when a person is diagnosed with cancer, he or she undergoes psychological shock and suffers from anxiety and depression. Psychologists generally describe these symptoms as “distress.”

According to a survey conducted by the National Cancer Center in 2009 on 375 cancer patients (stomach, liver, lung, colon, breast and uterine), 42.1 percent or 158 of the surveyed patients showed symptoms of distress. Of the total, 41.8 percent suffered from depression, 40.9 percent from insomnia and 28.7 percent from anxiety.

According to a study by the National Cancer Center, the suicide rate of cancer patients is double that of healthy people. The study also showed that more women kill themselves than men within the first year they are diagnosed.

In October, 2009, a woman in her 50s killed herself at a hospital in Seoul after suffering from a rare cancer. Her depression grew when the cancer returned for a second time.

“I’m only a burden to my family,” she repeatedly said. “What is the use of receiving treatment - the cancer is going to recur anyways.”

Often times, family members are not able to fully empathize with the distress the patient is going through.

“Patients feel depressed, especially when the treatment they receive is long-term or they experience side effects such as vomiting and hair loss,” said Yoo Eun-seung, a clinical psychology expert at the National Cancer Center.

Yoon Young-ho, an official from the Seoul National University College of Medicine, said, “In general, cancer treatment is focused mainly on providing a physical remedy, and patients’ mental health is rarely evaluated.”