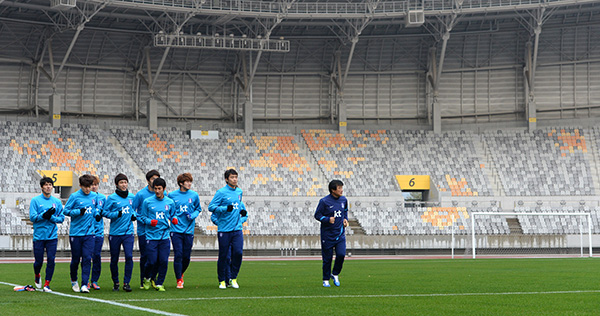 Korea’s national football team trains at Hwaseong Sports Complex in Gyeonggi on Monday ahead of tonight’s friendly versus Australia. National football coach Choi Kang-hee has opted to use the match to test younger players in search of a remedy for the weak back line. Korea is 32nd in the FIFA rankings, with Australia 33rd. [NEWSIS]


Coming off a two-game winless road campaign that almost wiped out their lead in the FIFA World Cup qualification group, the Taegeuk Warriors are hoping tonight’s friendly versus Australia will help them find their form ahead of the second wave of qualifiers.

But the task will be difficult with coach Choi Kang-hee excluding many of his key starters and veterans, opting to test younger players in search of a remedy for the team’s struggling back line.

Korea’s quest to clinch an eighth consecutive berth to the World Cup may not come to an end until the last of the four remaining qualifiers in the tight Group A next June, but the 53-year-old coach is mapping out a long-term plan accounting for a generational shift with the main 2014 tournament already in mind.

“If we look beyond the qualifying round to the main tournament, we need young players,” Choi told a media conference Monday night at Hwaseong Sports Complex in Gyeonggi, the venue for the Australia friendly.

The tune-up match, which kicks off tonight at 7 p.m., has been drawing attention from local football fans as it pits two of the best teams in the region against one another. Korea is 32nd in the latest FIFA rankings, just one slot ahead of Australia.

The two countries have met 22 so far with Korea slightly behind with six wins and seven losses. Korea, however, won three of the last five bouts, losing one and drawing the other.

Lee Dong-gook, the 33-year-old national team regular, has been called back after missing the previous qualifier against Iran, but most of the Choi fleet in the friendly will have young faces.

The Europe-based players such as Park Chu-young of Celta Vigo, Ki Sung-yueng of Swansea City and Son Heung-min of Hamburg have been all excluded in part in Choi’s consideration for their respective clubs’ schedules, but also to test out fresh resources.

Kwak Tae-hwi, 31, of Ulsan Hyundai, and Lee Jung-soo, 32, of Qatari side Al-Sadd, two regulars on the national team’s defense, were also left off the roster. Their vacuum in the center of the back line will be filled by young guns Jung In-hwan, 26, of the Incheon United; Kim Young-gwon, 22, of China’s Guangzhou Evergrande; Hwang Seok-ho, 23, of Japan’s Sanfrecce Hiroshima; and Kim Kee-hee, 23, of Qatar’s Al-Sailiya.

It will be the international debut for Hwang and Kim Kee-hee. Jung has made only two appearances for the national team previously while Kim Young-gwon has taken the pitch seven times.

The defense has been considered the weakest link for the Choi squad, its ineptness glaring during a 2-2 draw against Uzbekistan in September and a 1-0 loss to a 10-men Iran last month.

The right- and left-wing defenders have also seemed vulnerable with right backs Oh Beom-seok, 28, of the Suwon Bluewings; Choi Hyo-jin, 29, of FC Seoul; and Ko Yo-han, 24, of FC Seoul letting balls slip by.

Kim Chang-soo, 27, of the Busan I’Park, and Shin Kwang-hoon, 25, of the Pohang Steelers will likely be tested for the right-back positions against Australia.

Choi Jae-soo, 29, a left back for the Bluewings, was called up for the first time for an A-match to replace Park Joo-ho of Basel and Yun Suk-young of the Chunnam Dragons.

Two other young players - Ha Dae-sung, 27, of FC Seoul and Park Jong-woo, 23, of the I’Park - are expected to play defensive midfield.

Coach Choi said he hopes to test not only defensive players but also the players who have spent much of their time with the national team on the bench, such as attacking midfielders, Hwang Jin-sung, 28, of the Steelers; Lee Seung-gi, 24, of Gwangju FC; and Kim Heung-bum, 28, of Daejeon Citizen.