Local businesses are fretting about expected mounting costs as the government decided yesterday to enforce implementation of its carbon emissions trading system from 2015.

Although the Ministry of Environment has decided to give companies a grace period from 2015 to 2017 by not fining them for any excessive carbon emissions, it seems difficult for energy guzzlers to avoid penalties from 2018 as the government will start levying fines on them for extra amounts of carbon emissions they release during their operations.

From that year onward, even if companies do not exceed the levels of carbon emissions allowed by the government, they have to buy permission for emissions that amount to 3 percent of their total emissions by paying for them. From 2021, they will have to pay for 10 percent of the total.

This is part of the government’s goal to cut 30 percent of the country’s total greenhouse gas emissions, estimated to reach 570 million tons by 2020, under the law on low carbon and green growth. Currently, the government is regulating 584 companies that use significant amounts of energy to fine them if they overindulge.

Companies have been asking the government to delay the system until 2020.

The Korea Chamber of Commerce & Industry (KCCI) and Korea Steel Association predict that paying for 3 percent of emissions would incur about 4.5 trillion won ($4.124 billion) in costs every year. Paying for 10 percent would raise the costs to 14 trillion won, they say. “It is too early to implement the system,” said an official at the KCCI. “There may be increasing complaints among companies about increasing costs and the fairness of the government’s intervention.”

Some exporters and businesses that are huge energy guzzlers are exempt from the regulation.

Targeted companies are those that release over 125,000 tons of greenhouse gases a year, and factories with over 25,000 tons of carbon emissions. Each company or factory will be allocated emission limits by the government. If they fail to exhaust this, they can sell the “right” to the excess to other companies.

Businesses that release more emissions than permitted without requiring the right to exceed their quote - in the form of so-called certified emission reductions (CERs) - must pay penalties equivalent to three times the market price of carbon dioxide, which currently trades for 100,000 won per ton. 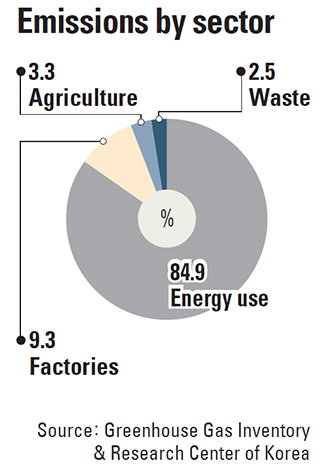 The government believes the trading system will eventually help local industries, as has been the case in other advanced countries.

“EU countries have succeeded in cutting their carbon emissions by implementing the system since 2005 without undermining the competitiveness of their industries,” said a government official at the Green Growth Commission.

A report by the commission says the EU slashed 16 percent of its total carbon emissions while the currency zone saw its GDP jump 40 percent since 1990. However, some companies have been preparing for the system to be implemented.

Posco, the country’s largest steelmaker, is keenly aware of the global movement. It will buy 20,000 hectares (77 square miles) of land in Uruguay to plant trees next year, which will help cut 200,000 tons of carbon emissions every year. For this effort, the steelmaker received permission from the United Nations’ UNFCCC to release certain amounts of greenhouse gases. But the steelmaker has expressed opposition to the government’s push for the regulation along with other local steelmakers like Hyundai Steel.

SK Forest, the afforestation unit of SK Group, plans to win CERs by growing trees on a 75-hectare plot of land in Goseong, Gangwon.