In U.S., Korea is public enemy No. 2 for price-rigging

In U.S., Korea is public enemy No. 2 for price-rigging

Only Japanese companies have been fined more than Korean enterprises for colluding on price-fixing in the U.S., according to a report by the Fair Trade Commission (FTC).

Since food makers CheilJedang and Sewon Japan were fined $1.57 million by the U.S. Department of Justice for fixing prices on lysine in 1996, local companies have been charged a total of $1.2 billion for collusion in the U.S., falling just short of the $1.3 billion levied against Japanese companies.

Japan also ranked first in terms of the number of companies charged with price-fixing, followed by the U.S. Korea shared third place with Taiwan. 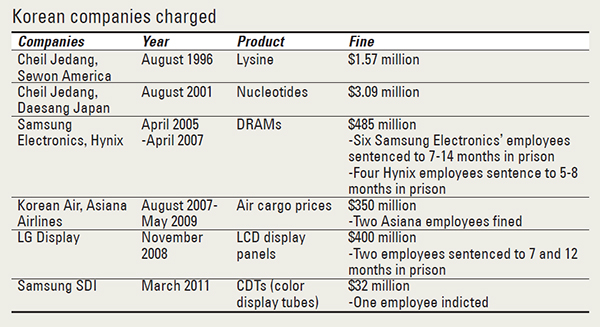 The report, based on a study of fines in excess of $10 million, comes at a time when trade protectionism is expected to heighten as the global recession deepens.

It showed that 15 employees of Korean companies have been incarcerated for such crimes, with some placed in federal penitentiaries. .

Three Korean companies - LG Display, Korean Air and Samsung Electronics - ranked inside the top 10 in terms of the size of the fines dished out. LG received the largest fine of the three, or $400 million.

Taiwan had two companies in the top 10, including tech company AUO.

“Investigations into conspiring over prices have been focusing more on Korea, Japan and Taiwan,” said an FTC official. “We believe this is largely because they have risen in stature in recent years as major trading partners with the U.S.” 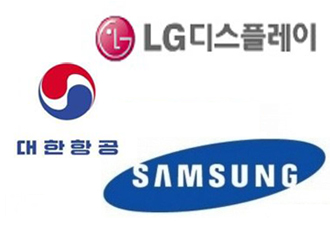 He also cited a lack of awareness, which he said causes “Korean and Taiwanese companies to fail to address the issue properly.”

The Korean antitrust agency predicted the U.S. authorities will step up their probes and raise the penalties in the future. It also expects them to widen their focus from computer chips, a key target in the mid-2000s, to other electronics products such as LCD displays.

The FTC held an event yesterday in Los Angeles to educate Korean companies about the tightening antitrust business practices in collaboration with the U.S. DOJ. About 100 executives and employees of some 40 companies attended. Since 2010, the FTC has held 11 such events in advanced economies like Germany and Singapore.

It plans to hold another meeting with the U.S. Department of Justice tomorrow to discuss conducting joint investigations.

“By presenting the latest trends and offering a better understanding of U.S. regulations on business cartels, we hope to maximize the effects of our measures to educate Korean companies,” an FTC official said.