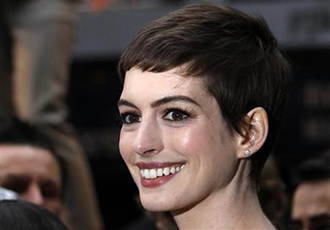 “I had to be obsessive about it - the idea was to look near death,” Hathaway told Vogue about preparing for her role as the consumptive prostitute Fantine in the musical version of Victor Hugo’s classic 19th-century French novel.

Hathaway, 30, told the December edition of the magazine that she first lost 10 pounds to begin filming and then later dropped another 15 pounds by eating nothing but two thin pieces of oatmeal paste a day.

“Looking back on the whole experience - and I don’t judge it in any way - it was definitely a little nuts,” said “The Dark Knight Rises” actress. “It was definitely a break with reality, but I think that’s who Fantine is anyway.” Extreme body changes have become part of Hollywood lore, even factoring into the marketing of films. Natalie Portman received much publicity for dropping some 20 pounds for her Oscar-winning role as a ballerina in 2010’s “Black Swan.”

Jennifer Lawrence, who plays the famished star of the life-or-death thriller “The Hunger Games,” made waves last week vowing never to diet for a role.

Hathaway said it was a rocky transition back into everyday life after filming.

“I was in such a state of deprivation - physical and emotional,” she said. “When I got home, I couldn’t react to the chaos of the world without being overwhelmed. It took me weeks till I felt like myself again.”

Directed by Tom Hooper (“The King’s Speech”), “Les Miserables” is scheduled to be released on Dec. 25 in the United States and is seen as a strong contender for Oscar nominations. The film version of the stage musical also stars Hugh Jackman and Russell Crowe.