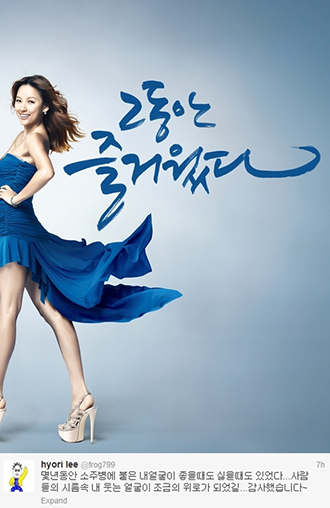 Lotte Liquor announced on Nov. 12 that it will not renew its contract with Lee Hyo-ri, drawing an end to a five-year relationship.
Since 2007, Lee has signed with the company eight times to remain as the longest surviving model for its line of soju, “Like the First Time.”

During the time, more than 20 billion bottles of the popular Korean liquor has been sold and Lee has become synonymous with the brand.

As a farewell present, Lotte said it will release videos and advertisements featuring Lee, capturing all the good times they had together.
Meanwhile, next month it will select its new model and begin shooting commercials.

Lee has also made her sentiments known about seeing her own face on soju bottles for the past years: “There were good times, there were bad times, but it was fun all the while.”
By Carla Sunwoo [carlasunwoo@joongang.co.kr]