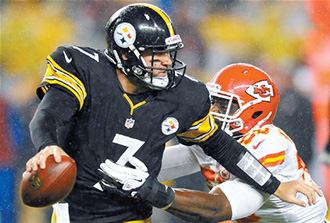 
PITTSBURGH - Their franchise quarterback on his way to the hospital, the momentum firmly on the other side of the field after a stunning last-minute rally by one of the NFL’s worst teams, the Pittsburgh Steelers appeared lost.

Timmons intercepted Kansas City quarterback Matt Cassel on the second snap of overtime and Shaun Suisham drilled a 23-yard field goal one play later to lift the Steelers to a 16-13 victory over the hapless Chiefs.

“We just stayed positive,” Timmons said. “It’s easy to get down on yourself, but we are not like that. We stand up, face adversity.”

Good thing, because there’s plenty to go around. The Steelers (6-3) have won four straight but played most of the second half without Roethlisberger, who left with a right shoulder injury in the third quarter after getting sacked by Kansas City linebackers Tamba Hali and Justin Houston.

Coach Mike Tomlin wouldn’t speculate on the severity of Roethlisberger’s injury and his status for Sunday’s showdown with AFC North leader Baltimore is uncertain.

“It didn’t seem like a tough hit .?.?. but he came to the sideline and next thing you know he was gone,” Pittsburgh left tackle Max Starks said. “I’m hoping it was nothing serious. Honestly it didn’t seem like it.”

Veteran backup Byron Leftwich came on in relief and completed 7 of 14 passes for 73 yards in his first regular season game in nearly two years.

“It wasn’t a pretty body of work by any of us, but his consistency remains the same in terms of being a stabilizing force for us,” Tomlin said.

Jamaal Charles ran for 100 yards and a score for the Chiefs (1-8), who have lost six straight.

The Chiefs had their chances, taking their first lead in regulation all season in the first half then overcoming a series of embarrassing miscues to tie the game at 13 at the end of regulation.

Taking over at the Kansas City 20 with 1:51 remaining, Cassel led the Chiefs 52 yards - converting a 4th-and-15 in the process - to set up a 46-yard field goal by Ryan Succop as time expired.