Instant photos in vogue with women

Instant photos in vogue with women 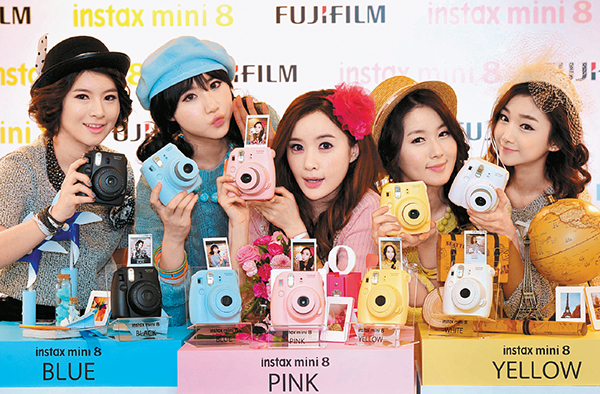 Models pose with the Instax Mini 8, the new instant polaroid camera launched by Fuji Film Korea yesterday at the Press Center in Jung District, central Seoul. Fuji Film Korea said it is targeting female consumers in their teens and 20s. Provided by the company


Fuji Film Korea is trying to revive instant photography in Korea, a practice many believe the sun set on for good with the advent of camera-equipped smartphones.

By introducing its new Instax Mini 8 in a range of colors and featuring feminine designs, the company said it is targeting young female consumers, who may more easily form a sentimental attachment to analog and snap one up as a second camera.

The company launched its first Instax in the Korean market in 1998 and has seen sales soar, according to Kang Shin-hwang, marketing director at Fuji Film Korea.

“Koreans buy more instant cameras than anyone else in the world, which almost seems paradoxical considering the country’s status as one of the world’s most developed IT powerhouses,” he added.

Kang cited a combination of clever marketing strategies and the unique tastes of Korean consumers as the main reasons behind the Polaroid-like cameras’ roaring success.

“We see room for continued sales growth here as we’ve strengthened our marketing channels by including bookstores, stationary stores and Internet shopping malls, giving female customers greater exposure to our products,” said Kwon Hyun-sun, another employee at the local unit of Fuji Film.

Specifically designed for young women, the Instax Mini 8 comes in a range of pastels and is decorated with various cartoon characters.

It is lighter, slimmer and more colorful than its immediate predecessor, the 7S, and has a “high-key” mode feature that brightens photos to, for example, improve skin complexions.

Women in their 20s and 30s are the main buyers of the camera as they like to keep photo journals and baby books, among other hobbies, the company said.

“Korean consumers are unique in that they are very sensitive to new trends while pursuing old-fashioned styles at the same time. Even though many have abandoned their analog cameras, nostalgia for film still exists among digital camera users.

“This is evident when you see them constantly using features that turn digital photos into ones resembling older photos printed on film,” Kwon said.

To expand its presence in the domestic market, the company plans to develop new models to penetrate other consumer groups.