Time for Korea to get its head into the cloud

Time for Korea to get its head into the cloud 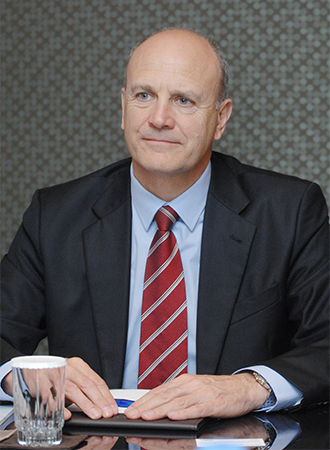 Korea is a global IT powerhouse with leadership in smartphones, semiconductors and many other home appliances. But it’s a different story when it comes to awareness of cloud computing technologies, one of the hottest buzzwords in the tech scene today.

According to a recent annual study jointly conducted by VMware, a leading U.S. cloud computing service provider, and market researcher Forrester Research, Korea ranks eighth among leading Asia-Pacific countries, falling behind Australia, Singapore and even India in the portion of IT companies and public institutions currently using cloud-based services.

Korea posted a user rate of 32 percent, up from 24 percent last year. In comparison, the figures for Australia, Singapore and India are above 50 percent.

“Koreans do not appear to feel an urgent need to leverage cloud approaches,” Andrew Dutton, senior vice president and general manager for Asia-Pacific and Japan at VMware, said in an interview yesterday in southern Seoul. The Singapore-based regional head was visiting Seoul for the annual VMware solutions symposium.

But the company finds a silver lining in the fact that 44 percent of those questioned in Korea said they are planning to adopt cloud, the highest rate among the top eight countries surveyed. “Korea lags in infrastructure but definitely has a lot of potential,” he said, “which is why Korea is such a significant market for us.”

The reasoning behind the idea is that Korea has the world’s leading manufacturers and suppliers, such as Samsung and Hyundai, and their need to move information seamlessly to all suppliers and partners around the world with the help of the virtual environment is on the rise, the regional manager said.

VMware is a 14-year-old company based in Palo Alto, California, and the world’s fifth-largest infrastructure software firm. It has eliminated the old “one server, one application” model and run multiple virtual machines on each physical machine - the so-called virtualization process - to help clients cut costs dramatically. 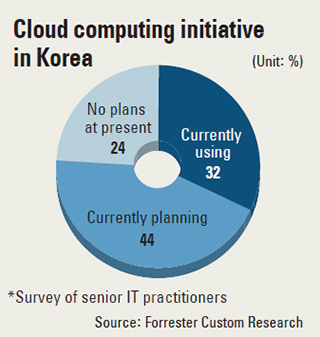 As of December 2009, the company accounted for 84 percent of the global virtualization market, according to market researcher Gartner. The cloud system is a superordinate concept that consists of virtualization and management of storage.

“Virtualization makes it possible for those employees of companies in need of high level of security to see only the information that the company wants them to see securely on any device they have - including personal computers and smartphones - anywhere in the world,” Dutton said.

In the “very near future,” virtualization technology will become as commonplace as smartphones are today, he said.

Japan has seen its move toward virtualization explode recently, with Tokyo Mitsubishi Bank deploying 50,000 virtual desktops in June. But in Korea, it is still in its infancy: Hyundai Heavy Industries is undergoing trials of desktop virtualization, according to Dutton.