With K7, Kia throws down gauntlet

With K7, Kia throws down gauntlet 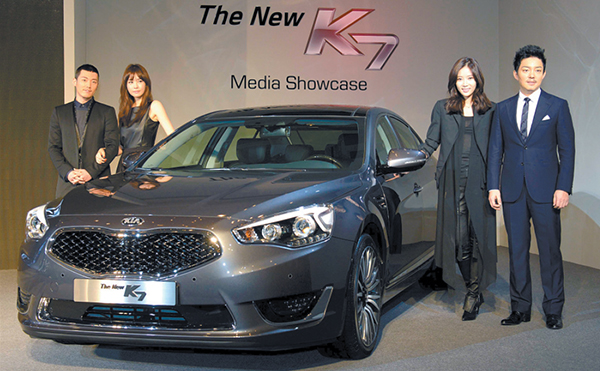 Actors from the TV drama “Iris 2” pose with Kia Motors’ latest K7 at the Ritz Carlton Hotel in Seoul yesterday. Kia said the model will be priced from 29.35 million (26,940 dollar) to 42.2 million won. Provided by the company


Kia Motors introduced its updated K7 yesterday as it bids to reinforce its presence and increase sales in this domestic market segment.

The K7, known as the Cadenza overseas, is part of a series including the K3, K5 and K9.

With its familiar “tiger nose” front grille designed by Peter Schreyer, the K7 has sold 83,000 units worldwide since November 2009.

The nation’s No. 2 automaker said it is confident that the face-lifted K7 will carry on the model’s success and solidify its image as a premium car brand.

“Kia’s global brand recently ranked 87th by Interbrand, and the K7 has significantly helped increase our value,” said Kia Motors President Lee Sam-woong yesterday. “The new K7 will reset the value of the large sedan segment with its unique style.”

Although there is no engine change, it boasts a slightly new look inside and out courtesy of new LED headlamps, luxury leather seats and an analog clock.

It is also equipped with a new “around-view” monitoring system with four separate displays for ease of parking, a blind spot warning system and a UVO in-car telematics system.

It will cost between an extra 1 million won ($917) and 3 million won than the previous edition. The 2.4-liter GDI (gasoline direct injection) model will start from 29.35 million won, while the 3.3-liter GDI, a high-end trim, will be priced from 42.2 million won, the automaker said.

Kia said it hopes to sell 3,000 units of the new K7 monthly and 5,400 units by the end of this year. The affiliate of Hyundai Motor Group revealed that it has received 1,800 preorders from local customers since Nov. 1.

The fullsize car market segment in Korea is currently dominated by Hyundai Motor’s Grandeur, which sold 72,574 units in the first 10 months of this year to take a 76.3 percent share.

Seo said the K7 will attempt to eat into sales of foreign rivals like the Lexus ES 350 but conceded it will no doubt cannibalize demand from the Grandeur, made by its bigger affiliate.

Kia is set to release two new models next year including the successor to the Carens, a compact, and an updated version of its K5, he added.