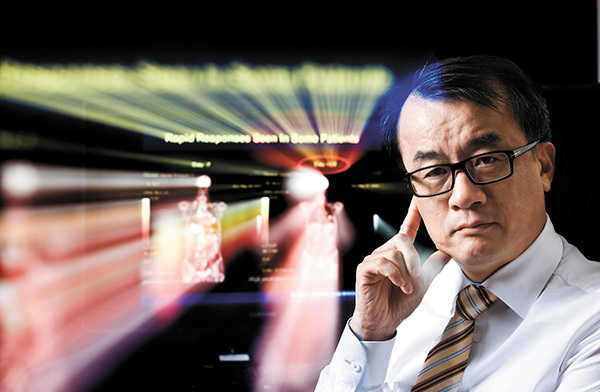 
Although the national health insurance system covers 95 percent of the cost of hospital treatment for cancer patients, it fails to cover many related medications, putting households under strain, according to Bang Yung-jue, a professor of medicine at Seoul National University.

Bang, chairman of the board at the Korea Cancer Association, said the process of evaluating whether to add new medications to the list of those covered is too complicated and slow, causing a financial drain on victims’ families.

As he specializes in performing clinical tests on patients with stomach cancer, he said it is often exasperating to deal with the grinding machinery of the system as he sees cancer patients die each month.

Q. What is your greatest source of frustration?

A. While it’s important for doctors to get results from clinical tests on humans to see whether a certain medicine is effective or not, the whole point of these tests is to deliver drugs that offer some help to patients quickly.

In the United States, as soon as the results are approved and put online, the insurance immediately covers the drug. In Japan as well, when certain anti-cancer medications are found to be effective, they are automatically covered. But in Korea the process is too slow.

Of course, the rich may have no problem paying 4 million won [$3,668] for their medicine every month. But this is not the case for most middle-class families, which is why so many people complain of having to sell their house to pay for drugs [when they are diagnosed with cancer]. This issue has been talked about for years. Now it’s time to find a solution.

How long does it take to decide if the insurance is going to cover anti-cancer drugs?

Almost three years, twice as long as for drugs for other diseases. In the meantime, patients die knowing there are treatments that can potentially save them. As a doctor, it’s very painful to see. According to the Health Insurance Review and Assessment Service, it is illegal for doctors to prescribe medicines unless a decision on whether they should be covered by the national insurance has been made.

So in some cases, doctors are legally forbidden from informing patients there are effective medicines out there?

Yes. But I feel that if I don’t give patients enough information about possible treatment options, I’m depriving them of their right to be happy. However, most doctors don’t have a say in the matter. There are many unfortunate ironies in Korea’s medical system.

How can the situation be improved?

I understand that the National Health Insurance Corporation and Health Insurance Review and Assessment Service have to consider the financial aspect of subsidizing treatments and medications. But I don’t want them to forget the fact that people’s lives are in their hands, and every second counts. Maybe they can try reshuffling their finances, as some people claim that too much money is being spent on other, less serious diseases. It might be necessary for them to increase their labor force and clarify when assessments [on each medication] will proceed.

When you first started out, Korea was relatively new to clinical trials. How did you find the experience?

At first, I felt restless. There were almost no local pharmaceutical companies making new drugs, and it was impossible to gain access to the new ones produced by foreign companies.

Thankfully, one local conglomerate finally took the step to develop new medications, and then it became possible to perform clinical tests on people. It was very fortunate that I was able to participate in those tests 20 years ago. And things got much better after foreign pharmaceutical companies were able to perform clinical tests in Korea since 2000.

How did Korea rise to become the No. 2 country in clinical tests on humans?

There are too many patients, but not enough doctors. So each doctor starts to get a lot of experience in the field. I think the fact that Korean doctors are more aggressive in terms of promoting their efforts than doctors from other countries also helped Korea make a name for itself.

How are other countries doing in this field?

China, India, Russia and Poland are now moving very aggressively. Because it is important to be part of clinical tests to cure patients, they are all rushing to get some work.

Still, Korea is showing good results in those tests and related projects, but I think global pharmaceutical companies are debating whether they should shift their focus to those newly emerging countries and work with them, as those nations offer their services at a much lower price. I think what Korea needs to do is to perform more clinical tests for patients in the early stages of serious diseases, and guarantee that we can be more efficient than other countries.

Why is it so important to be a strong player in clinical tests?

You get an access to newly developed drugs. After all, participating in clinical tests decides whether your patients can try out effective new medicines or not. Some patients have been living for about 10 years on anti-cancer medications thanks to doctors who secured their drugs during the process of clinical tests.

What advice do you usually give to students regarding clinical tests on humans?

I always tell them to follow the ‘seven Cs’ - credit, courtesy, communication, curiosity, creativity, contribution and collaboration. If you think about it, the seven Cs could be a universal guide to survival.

Why do you think the number of cancer patients keeps growing?

Many blame air pollution, but it’s mostly because of aging. The longer you live, the higher the chance of getting cancer. The reason there were fewer cancer patients in the past is because average life spans were a lot shorter. According to a report by Statistics Korea last year, one in three Korean men and one in four Korean women will get cancer.

Soon, one in two Koreans will get the disease. Therefore, cancer is a problem for all of us. That’s why we need to strive harder to come up with effective methods of treatment.