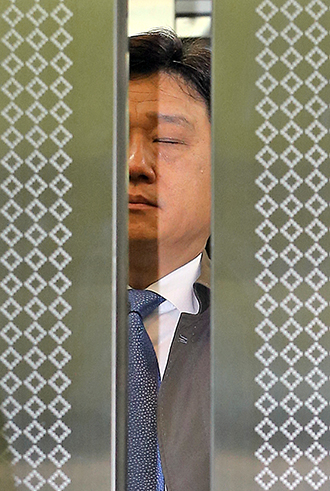 The independent counsel headed by Lee Kwang-bum that has been investigating President Lee Myung-bak’s Gangnam retirement home project wrapped up its 30-day investigation today with successes and failures according to the goals of the probe.

The independent counsel broke ground by discovering that first lady Kim Yoon-ok was involved in the land purchase for the president’s retirement home.

They obtained testimony from former officials of the Blue House who had handled paperwork that said, “The first lady put in a request for money through a mortgage program.”

The first lady borrowed the money from the Blue House branch of Nonghyup Bank by using her 349.6 square meters (4,297.2 square feet) of land in Nonhyeon-dong, southern Seoul, worth about 1.3 billion won ($1.19 million), as collateral.

The independent counsel also found something else that the prosecution didn’t during its investigation.

The president’s 34-year-old son carried 600 million won in three separate bags of cash after borrowing it from his uncle Lee Sang-eun, chairman of DAS Corporation.

The president’s son, however, testified to the counsel that he signed a promissory note when he borrowed money, thus there is no problem in using the uncle’s money.

However, the independent counsel tried to obtain the promissory note by raiding the Blue House on Monday for the first time in history, but failed.

They couldn’t identify when the promissory note was made.

The independent counsel also found the sources of the 600 million won.

The president’s brother testified to the counsel when he was summoned: “It [600 million won] was portions of profits I have made when I invested in funds with the money I got from selling my land in Dogok-dong, southern Seoul.”

Lee also submitted related documents to prove his investment as evidence. There were allegations the actual owner of the Dogok-dong land is the president, but the independent counsel believed the president’s brother.

In the end, the independent counsel eventually failed to prove how the president couple was involved in the Naegok-dong land purchase thought it has revealed new allegations.

They questioned the first lady in writing instead of a face-to-face probe and also failed to summon the wife of the president’s brother surnamed Park, who is known as the person who handed over the 600 million won to the president’s son.

They also probed the Naegok-dong land owner, surnamed Yoo, 57, only through e-mails.

The independent counsel considered recommending indicting the president’s son for violating the country’s real estate law, which says that land must be purchased in the actual name of the owner, but decided not to give that recommendation in the end.

The counsel will hold a press conference today to report its investigation results.