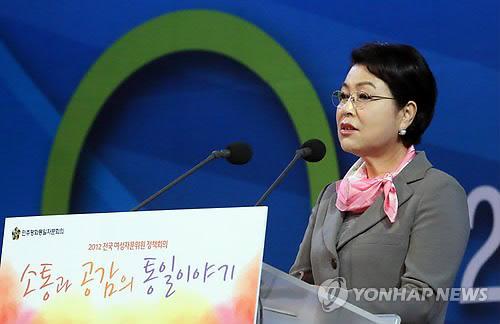 First lady Kim Yoon-ok is expected to turn in written answers to questions from a special counsel team looking into suspicions surrounding a now-defunct project to build a retirement home for President Lee Myung-bak, an official said Tuesday.

Special prosecutor Lee Kwang-bum's team sent a list of questions to the first lady on Monday after deciding to question her in writing, instead of calling her in for a face-to-face questioning, out of courtesy to her.

"We will do everything required of us legally," the official said. "First lady Kim will handle this after consultation with her lawyer."

The special prosecutor plans to announce the outcome of his probe on Wednesday, after President Lee turned down a request for extending the investigation. Presidential officials said they believe the team investigated the case sufficiently enough to draw a conclusion.

But critics denounced the rejection as part of an attempt to cover up the truth, along with the presidential office's refusal to comply with a search and seizure warrant on Monday. By law, investigators cannot raid government offices handling secretive affairs without their consent.

"There is nothing whatsoever Cheong Wa Dae is trying to cover up," the official said. "This case is very simple and we anticipate that if this is brought to the court, the court will make a fair judgment."

The scandal centers around a deal last year to buy a plot of land in Naegok-dong on the southern edge of Seoul for a retirement home for Lee, and auxiliary facilities for security personnel there. The land was bought jointly by the president's 34-year-old son, Lee Si-hyung, and the presidential security service.

The cost was not shared evenly, however, with the security service paying too high a price for the site for the security facilities in what the opposition claimed was a scheme to allow the son to profit from buying the site at a below-market price.

The presidential office has flatly rejected suspicions, and Lee later scrapped the project and decided to move into his existing private house in Nonhyun-dong in southern Seoul after leaving office in February.

The National Assembly sought a special investigation after prosecutors wrapped up an inquiry into the scandal in June without filing charges against anyone involved, saying all suspicions in the case had been resolved. (Yonhap)