Prosecutor at center of tug-of-war questioned

Prosecutor at center of tug-of-war questioned 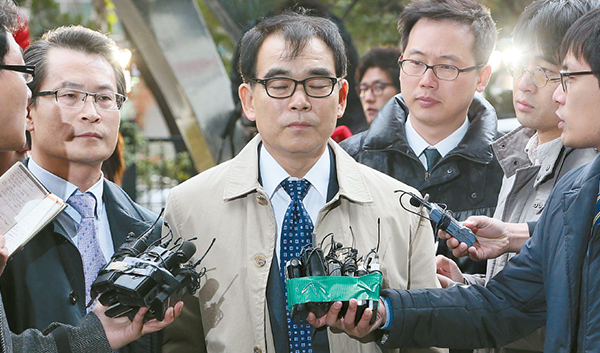 
The senior prosecutor at the center of a tug-of-war over criminal investigations was named and called in for questioning yesterday.

Kim Gwang-jun, 51, a senior prosecutor at the Seoul High Prosecutors’ Office, is suspected of taking hundreds of millions of won in bribes from Cho Hee-pal, a notorious pyramid scheme con artist, and Eugene Group, a construction company.

Kim was summoned by a team of special prosecutors headed by Kim Chang-soo, 50, to the Seoul Western District Prosecutors’ Office in Mapo District, western Seoul, at 3 p.m. and questioned.

The police have refused to walk away from the investigation of Kim. Political analysts also see their targeting of a senior prosecutor for a corruption investigation as payback for the prosecution’s investigation of crooked policemen in the Gangnam area of southern Seoul since March.

Yesterday, the two competing probes started getting in the way of each other, and the prime minister tried to intervene.

Kim is suspected of taking 240 million won ($221,000) from con artist Cho and also receiving 600 million won from Eugene Group in 2008 when he was investigating corporate irregularities at the Seoul Central District Prosecutors’ Office.

On Monday, Eugene Group CEO Yu Kyung-sun and his younger brother Soon-tae, chairman of EM Media, an affiliate of Eugene, were questioned by the prosecution team.

Last week, the two were summoned by the Intelligence Crime Team of the National Police Agency to appear at its office on Friday. The brothers notified the police through their attorney that they will not obey the summons because they were already questioned by the prosecution.

But the police are refusing to stand down, even though they are required to obey the prosecutors by law.

“Whether a suspect is a police officer or a prosecutor,” Kim Ki-yong, commissioner of the National Police Agency, told reporters during a press conference, “our job is to make a suspect take legal responsibility for a crime. We will continue to investigate Kim within the scope of our authority because the police are the ones who launched the investigation.”

To try to end the stand-off, Prime Minister Kim Hwang-sik held a meeting with Minister of Justice Kwon Jae-jin, and Maeng Hyung-kyu, minister of public administration and security, who oversees the police, at the Central Government Complex in Gwanghwamun, central Seoul. He urged the two ministries to start cooperating with each other.

Although being technically under the ministries, both the prosecution and the police have independence.

“The two agencies must handle Kim’s case based on the criminal procedure code that specifies the jurisdiction over criminal investigations,” the prime minister said.

Under the revised criminal procedure code, even if an investigation is started by police, they must hand over related materials or suspects to the prosecution upon request.

The Prime Minister’s Office said it will enact a “special measure” if the tug-of-war doesn’t end soon, but it didn’t specify the measure.

“We think the police and prosecution can resolve the issue,” said Yim Jong-yong, a minister in the Prime Minister’s Office. “But we will provide every possible solution if they can’t.”

The police reacted quickly to the prime minister’s statement.

“We will focus on issues that the prosecutors are not investigating,” a spokesman of the NPA told reporters. “We will not resummon people who have already been questioned by the prosecutors.”

Sources in the police said they have acquired information about more types of corruption allegedly involving Kim.

The Supreme Prosecutors’ Office suggested the police form a joint committee to discuss the investigation system.

“We will try to narrow our differences with the police,” Kim Woo-hyun, a spokesman from the Supreme Prosecutors’ Office, said.