Seoul to ban smoking in all indoor facilities by 2020

Seoul to ban smoking in all indoor facilities by 2020 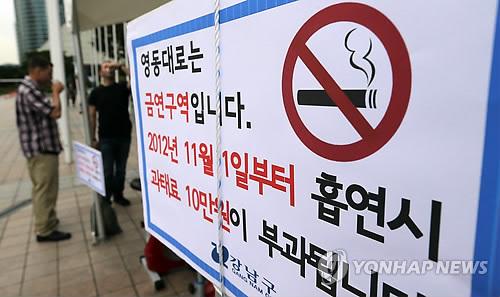 Smoking will be completely prohibited in all indoor facilities in the South Korean capital city of Seoul by 2020 as part of efforts to promote public health and protect the environment, the municipal government said Tuesday.

Under the slogan of "Smoke-Free Seoul City," the metropolitan government announced comprehensive policy measures to discourage smoking in the city.

In accordance with World Health Organization regulations, the city said it will push for a complete ban on smoking in indoor facilities used by the general public, including restaurants and bars, regardless of their size and function.

Currently, smoking is not allowed in facilities larger than 150 square meters, with the law set to go into effect on Dec. 8.

With an aim to lower the smoking rate among the city's male adults from the current level of 44.2 percent to under 29 percent, the average among the member countries of the Organization for Economic Cooperation and Development, the city decided to set up more public clinics to help smokers give up tobacco and to urge the central government to raise cigarette prices.

"Smoking does harm to everybody, as it affects even non-smokers, worsens the inequality of health conditions among the public, and creates diverse social troubles over adolescent smokers," Seoul's Vice Mayor Kim Sang-bum said. "By declaring a smoke-free city, Seoul will take the lead in creating an environment to protect the public from the hazards of smoking." (Yonhap)