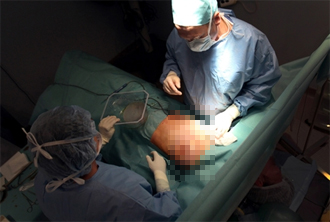 A 38-year-old housewife received breast augmentation surgery early last year at a plastic surgery clinic in Ansan, Gyeonggi, but she didn’t get exactly what she asked for.

The clinic told her they had silicone-gel breast implants approved by the Korea Food & Drug Administration and are half the price of those on the market.

It wasn’t long after, however, when the housewife began to feel pain around her new breasts.

She then received implant-removal surgery at another hospital. It turned out that the silicone they used for the implants was in fact for industrial use, which has more contaminants than the medical-grade gel that is approved for use.

Industrial silicone, which can be toxic and cause health problems, has been used for breast implants by more than 100 clinics in Seoul and its surrounding areas over the past 10 years, the police reported yesterday.

The Gyeonggi Provincial Police Agency said yesterday they arrested a 43-year-old suspect surnamed Shin for providing breast implants filled with industrial-use silicone gel to over 100 clinics since 2002. The police are investigating how many women might have received the implants but the exact number is as of yet not known.

The suspects are also accused of making a mold for breast implants and having a factory in Korea produce and manufacture the illegal implants in large numbers.

The authorities also indicted three other suspects on the same charge and are set to expand their investigation to a list of clinics alleged to have paid Shin for the implants. The procedure cost the patients around 3 to 4 million won ($3,668), which is half the regular price for breast implant surgery.

The four suspects also allegedly smuggled Botox, a drug that can be life-threatening and is used for the temporary removal of facial wrinkles in small amounts, from China and sold it to plastic surgeons.

According to the police, the industrial silicone implants are required to be registered and tracked by the KFDA for their potentially harmful effects.

The side effects from the industrial silicone include hardening of the implanted areas, dermatitis and tissue death. The investigators also reported the culprits sold the illegal products as if they were already approved by the KFDA.

“We are to further look into over 100 clinics in the metropolitan area that have purchased harmful breast implants from the suspects knowingly and used them for plastic surgery,” said the police.