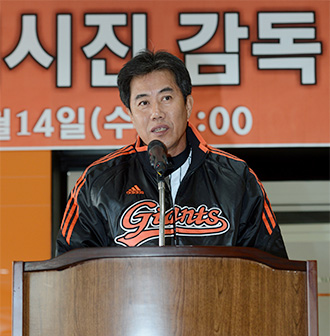 Kim Si-jin, the new Lotte Giants manager, said yesterday that he will focus on developing pitchers in order to end the club’s 20-year title drought.

“I think stabilizing the starting rotation will be something that I need to complement first,” Kim, 54, said during his first press conference as the manager of the team.

“The starting rotation of Lotte was not firmly fixed this year,” he said. “I will try to develop the existing starting resources and help them pitch steadily.”

Kim, the first pitcher in the Korea Baseball Organization to win 100 games, dominated the sport until his retirement in 1992.

Turning to coaching in 1993, he is known for his ability to develop star pitchers. He trained pitchers during his time with the Nexen franchise (previously the Taepyeongyang Dolphins and the Hyundai Unicorns) before the Heroes sacked him in September.

The Giants signed Kim to a three-year deal on Nov. 5, bringing him back to the club he played for decades ago. Kim, who debuted with the Samsung Lions in 1983, pitched his four last years for the Giants.

After arriving in Busan last Wednesday, Kim quickly worked on organizing the club’s pitching resources, bringing in his former pitching coach Jung Min-tae from the Heroes.

Kim said the minor-league team of the Giants is also the subject of his reform.

“At first, I will focus on the pitching.”

His predecessor Yang Seung-ho contributed to the Giants’ second- round playoff appearance for two straight years, but the club’s front office was not happy, saying it is nothing without winning the title, which the club last won in 1992.

“I have a goal of winning in my heart, but I will delay it,” Kim said. “To be able to show a good performance to the fans, I will sweat it out with the players on the ground from today. I can promise that.”

He also avoided giving a clear answer when he was asked whether he thinks Lotte has a lineup strong enough to win it all.

“Having a strong team alone cannot bring about wins,” he said. “There needs to be a strong mentality and cohesion. In addition, the coaching staff, front office and players need to have strong communication among one another.

“When that happens, winning will come naturally,” he said.