Actor fights for spotlight after Army

Actor fights for spotlight after Army 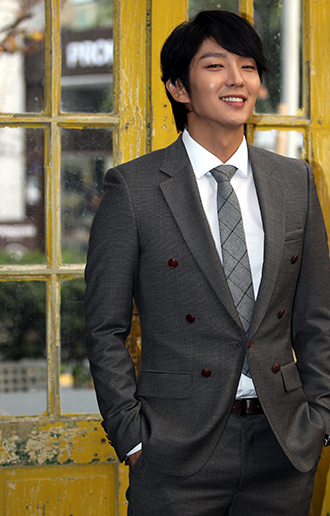 Actor Lee Joon-gi left the entertainment scene in 2010 when his popularity was at its peak to serve in the military. He was concerned about his comeback, but his drama series has received positive reviews. By Lee Young-mok

Mandatory military conscription is a sensitive subject in Korea and can pose a major obstacle for athletes and entertainers who must put their careers on hold for at least 21 months to fulfill their national duty. Lee Joon-gi, an A-list Hallyu actor whose popularity was surging in Japan and China when he enlisted, is case in point.

The 30-year-old began serving back in May 2010, disappearing from the spotlight for close to two years. He jumped immediately back in the entertainment scene and is hoping he can return to his previous heights.

Lee said he realized that he took many things for granted and as a result became more passionate about his work after enlisting in the Army.

“The hardest part was that I had to draw a sharp line between actor Lee and the real me,” Lee said during a recent interview with Ilgan Sports, the sports daily of the JoongAng Ilbo.

After his discharge in February, Lee chose the drama series “Arang and the Magistrate” as his first comeback project. The fictional period drama centers on a magistrate (played by Lee) who sees spirits and a female ghost named Arang (played by Shin Min-a) who wants to uncover how she died.

Lee said he has always been confident about his decision but admitted that his return to acting was an anxious time in his life. Fortunately, the 20-episode drama came to an end last month after positive reviews and high ratings.

The following are excerpts from the interview with Lee.

Q. What score would you give your recent drama series “Arang and the Magistrate” out of 100?

A. I don’t think I’m entitled to do that. I was under a lot of pressure when I was working on it. I wasn’t so sure that I was ready to act again. But positive reviews from fans and viewers helped me gain confidence.

What was it like to work with Shin Min-a, one of today’s hottest actresses?

The chemistry was there. In fact, I was worried about working with her in the beginning. I thought she wouldn’t be the type of person I could get along with easily. It took some time, but she and I got close. She doesn’t really care how she looks, unlike other actresses who always want to look pretty.

Tell us about your experience in the military.

The hardest part was that I had to sleep and live with many other people. Everyday in the military was unpredictable. It took about three weeks to adapt to the new environment. It takes some time, but once I got used to one thing, I gave it my all. I found pleasure in living as a solider. They give out awards to those who earned top scores in shooting and basic training, and I was one of the top performers.

This year, two Korean films attracted 10 million viewers each. How do you feel about this?

I’m jealous. When my film “King and the Clown” came out in 2005 and attracted 10 million people, it was unthinkable to get such huge numbers, but two films reached the mark this year. I have to do a film next time [laughs].

It’s quite hard living as an actor because everyone scrutinizes everything you do.

I hardly go out. I used to not drink in public and didn’t go parties if there were female guests. My manager was always with me even if it was a personal event. But I’ve tried to loosen up these days. I go out drinking in public now.

If you had to name your rival actor, who would it be?

It’s hard to pick just one because there are so many good-looking and attractive actors. One thing I can tell you for sure is Kim Soo-hyun and Song Joong-ki are the hottest actors of the year and Jang Keun-suk’s popularity seems unbeatable in Japan.

What are your immediate plans?

Fan meets have been scheduled in China and Japan, and there are some other things that I have to do in both countries. A new album will be released, and a photo shoot is also part of my plans.