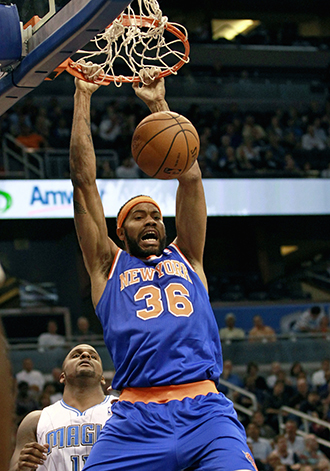 New York Knicks’ Rasheed Wallace (36) dunks the ball in front of Orlando Magic’s Glen Davis, left, during the first half of an NBA basketball game, Tuesday. The Knicks won 99-89 to extend their undefeated run to five. [AP/YONHAP]

ORLANDO, Florida - In their first four games, the New York Knicks surprised many by consistently performing above preseason expectations and jumping out to an unbeaten start.

Another night and another victory later, the Knicks’ breakout beginning doesn’t seem to have an end in sight.

The victory extended New York’s NBA-best start. The Knicks have won their first five games for the first time since opening the 1993-94 season 7-0 on their way to the NBA finals. The Knicks remain the league’s only unbeaten team.

“Defense, we buckled down,’’ Anthony said. “We kind of slowed them down, kept them off the glass rebounding. Once we had a chance to rebound the basketball, get out and make some shots, we didn’t turn back from there.’’

J.J. Redick scored 18 points and Arron Afflalo added 13 for the Magic, who were stunted by 20 turnovers that led to 24 New York points. Orlando dropped its fifth consecutive game and continues to struggle without starters Jameer Nelson and Hedo Turkoglu.

“You have to want to win more, simple as that,’’ Afflalo said. “There’s not one man on this team that’s going to do it, [we] pretty much have to want it more.’’

New York coach Mike Woodson has made no secret of the fact that for the Knicks to continue their recent output long-term, keeping his older team well-rested will be a necessity.

A three-day rest following their dominating win over Dallas on Friday was perfect timing for a Knicks squad that played its first three games in just four nights.

It showed against an Orlando team whose younger players were fearless attacking New York early on.

But so much youth on the floor also gave way to some careless mistakes late in the second half. Orlando pulled to 82-80 before the Knicks went on a 13-4 spurt to take a 95-84 lead with 2:36 to play and put the game away.

The Knicks will have another break from game action Wednesday before playing at San Antonio Thursday night.

Smith said the Knicks are enjoying where they’re at right now.