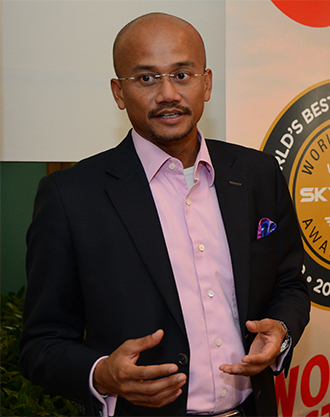 AirAsia X, the long-haul arm of AirAsia, and the region’s biggest low-cost carrier (LCC), will launch a flight next year between Busan and Kuala Lumpur, its CEO Azran Osman-Rani said yesterday. At a press conference in Seoul, the 41-year-old Malaysia-born CEO said the company is awaiting the Korean government’s approval to open a route connecting its southern port city to the Malaysian capital.

“The Malaysian government has already approved the route,” Osman-Rani said. “We hope that [Korea follows suit] before next summer.”

The Malaysia-based LCC, which specializes in flights longer than four hours, currently flies between Incheon and Kuala Lumpur once a day. But Osman-Rani, who joined the airline in 2007, said that more flights will be added. It already flies to 15 destinations in China, Australia, Taiwan, Japan and Nepal.

“We don’t have specific plans to add new countries to our business, but to add more destinations within existing countries,” he said.

The airline is set to bolster its fleet with 14 new aircraft over the next two years to make a total of 25 airplanes. To raise enough funds it is planning to list on the Malaysian bourse, the CEO said.

Foreign media have speculated it aims to raise $250 million by selling 790 million shares, but Osman-Rani refused to confirm this.

He said AirAsia X is willing to commit to the Korean market as demand is racing. Last year, over 520,000 passengers flew with the airline, more than double the number when it launched here in 2009. Osman-Rani said the company hopes to increase its Korean sales by 60 percent by 2014.

“This is a country where two-way demand exists,” he said. “This whole Hallyu [Korean Wave] has increased Korea’s profile all over the world.”

The company will also concentrate on online and mobile marketing, and utilize AirAsia Expedia, a joint venture with online travel company Expedia, he said.

“What’s unique about Korean customers is that everyone is using smartphones, but they still prefer to go to travel agencies to purchase flight tickets,” he said. “My challenge is to improve the quality of our Web sites and mobile applications so that people can access our services much easier.”