Coupang told to mend its ways after beef blooper

Coupang told to mend its ways after beef blooper 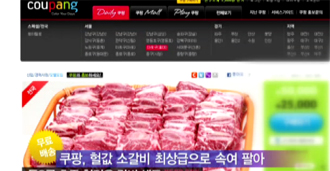 Coupang, a Korean social commerce site that claims to dominate the domestic market, advertised the beef as being “juicy and the superlative” and highly graded under Australia’s classification system.

The so-called “Special S” grade was later found to be a complete fabrication, leading the fair trade watchdog to impose a fine of 8 million won ($7,360).

“Although an S grade exists in Australia, it is the third-lowest grade given to female cows that are less than 42 months old,” said an FTC official. “As Coupang was selling chuck rib, which is normally tough and fatty, we decided there was no way it could merit such a high appraisal.”

The company posted sales of 117 million within three days by claiming to sell the beef at a more than 50 percent discount.

“In the future we will encourage sellers of imported beef to prove how the meat is classified at its country of origin,” the official added.

The company admitted its promotions had been misleading but blamed it on teething problems. “This mistake took place 15 months ago when Coupang was still starting up,” said Jeon Si-nae, manager of Coupang’s communications team. “We acknowledged at the time that we had been remiss in our fact-checking. We’ve learned from our mistake and upgraded our system for buying fresh food.”

This is the second time the social commerce company has been slapped with a fine by the FTC this year.

In February, it was ordered to refund dissatisfied customers who had paid for their goods using cyber money, which has the equivalent value to cash on Coupang’s Web site. Before that, the company refused to give refunds. It was fined 5 million won.

“As social commerce services often offer high discounts for short periods only, it triggers impulse buys,” the FTC official said. “Prior to the holiday season near the end of the year, we’ll closely monitor these sites to weed out misleading promotions.”