Twin towers with a twist in Gangnam

Twin towers with a twist in Gangnam

The showrooms of Samsung Electronics, left, and LG Electronics, right, face each other diagonally across Hakdong intersection in Gangnam, southern Seoul. By Seo Ji-eun


Samsung Electronics and LG Electronics, Korea’s top two tech giants, are set to wage a showroom battle in the posh area of Hakdong intersection on the border between Apgujeong-dong and Nonhyeon-dong in Gangnam, southern Seoul.

One month after Samsung opened a six-story main branch of its Digital Plaza showroom on Oct. 11 in Gangnam, LG has followed suit by setting up shop catty-cornered on the same road. The two stores are only a block away from a luxury boulevard where brands like Louis Vuitton, Giorgio Armani and Cartier vie for consumers’ attention.

The tech leaders’ move to buy expensive properties and open showrooms featuring a comprehensive lineup of products as well as after-sales service centers is aimed at tapping well-heeled customers as mid- and low-income earners are closing their wallets amid the flagging economy.

“Securing a wealthy base of customers in the local area is the top priority of the Gangnam branch,” said a Samsung spokesman. “The store enables customers to see and use the products, which gives us the fringe benefit of garnering instant feedback and understanding their needs.”

A spokeswoman for LG said that “the primary reason we’re launching our biggest-ever Bestshop at Hakdong intersection is so we can promote LG’s premium product image.”

The two showrooms are huge and less than 300 meters apart. Samsung’s spans 1,467 square meters (15,791 square feet), the largest among all Digital Plazas in the Seoul Metropolitan area, second only to its store in Busan. LG’s five-story Bestshop is the biggest of all of its showrooms, spanning 1,652 square meters.

When the Korea JoongAng Daily visited yesterday, Samsung Digital Plaza had about a dozen customers from the Middle East. They were on a group field trip, said a mid-level manager at the branch.

“Ever since we have opened this branch, there has been an endless chain of foreign visitors. Most of them come from companies that are in partnership with Samsung, while others come to benchmark either the store or the products.” 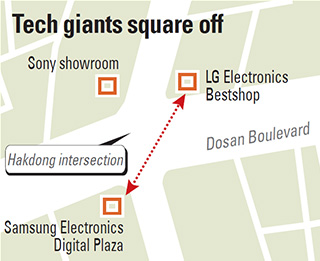 Mobile devices from smartphones to tablet PCs are displayed on the first floor, while the second houses TVs, PCs and digital cameras. Several centralized sections show mock living rooms with a sofa and TV so customers may relax while taking in the latest and biggest flat-screen TVs. The third floor has bigger appliances such as refrigerators, air conditioners and washing machines. In a corner devoted to Nespresso, Nestle’s coffee pod machine, a clerk was giving away free espressos. A customer service center takes up the fourth floor and the others are used for storage.

LG’s showroom appears to be more focused on creating a comfortable environment. In one corner sits a long-table and a magazine rack so customers can sip coffee, read and relax. The first five stories are devoted to product displays while the top floor serves as a customer care center.

Right across from the store is Sony’s one-story Apgujeong showroom, which has been in place since 2000. It reopened in June after a month of remodeling and has since been running a so-called “premium customer service program,” which offers previous customers the option of renting products that have not yet been officially launched, among other benefits.

When asked if Sony sees the new Samsung and LG showrooms as a threat, a spokeswoman sidestepped the question, merely saying that “keeping customers satisfied rather than instantly coping with a new [competitive] environment is our key concern.”