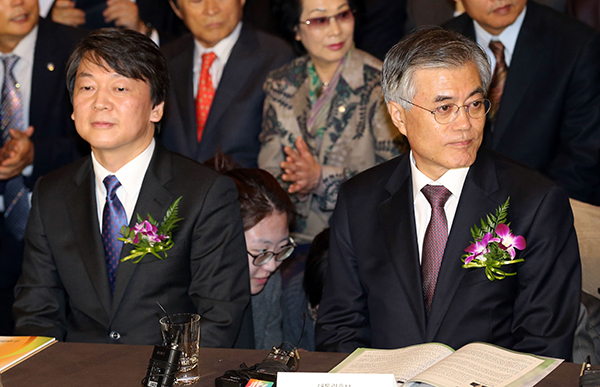 
Negotiations broke down between the two main liberal presidential candidates to combine their campaigns.

Close aides to the Democratic United Party’s Moon Jae-in and independent Ahn Cheol-soo met Tuesday for the first day of talks about how to decide which candidate will stand down. They made good progress, agreeing on five points, including the idea of holding a televised debate between the two candidates soon.

But Ahn’s group called an emergency press conference yesterday to say the talks were off, at least for the time being.

“The words and the actions of Moon’s negotiators are contradictory,” said Yoo Min-young, Ahn’s spokesman. “The negotiations will be temporarily suspended.”

Yoo said the DUP is spreading rumors that Ahn will give up his candidacy to endorse Moon, and some newspapers are publishing them as if they are true.

“The allegation of Ahn Cheol-soo’s concession is groundless,” Yoo said. “This morning, we expressed our deep concerns about Moon’s negotiators because they are breaking trust with us over the candidacy merger. We demanded that they take measures as soon as possible, but we haven’t heard any sincere response.”

The Hankook Ilbo yesterday quoted “a core member of Moon’s camp” as saying: “Ahn will concede [to Moon] if the candidacy deal isn’t finished this week. Ahn should have agreed to a merger no later than mid-October if he indeed had ambitions [in politics].”

“This is not the first time that the DUP and Moon’s camp did things that ruined our relationship,” Yoo said. “When we had the first meeting yesterday, they made personal attacks against us and also publicly commented on something that we didn’t agree to announce.”

But Yoo said Ahn’s group was “ready to resume the negotiations.”

When asked whether Ahn ordered them to suspend the negotiations, Yoo said, “We independently judged the situation and made the decision. We will report this [to Ahn] later.”

Park In-bok, who is in charge of fund-raising for Ahn’s campaign, said at another briefing yesterday that contributors are protesting after hearing the rumor that Ahn will concede to Moon.

“People say they heard the rumor that Ahn will yield his candidacy and ask why we are carrying out this campaign,” Park said. “Some even suspect the fund is a fraud.”

The Ahn Cheol-soo Fund aims to raise money for the independent candidate’s campaign. It aims to raise up to 28 billion won ($25 million), half the legal maximum for election expenses.

If Ahn runs and receives at least 15 percent of valid votes, he will be reimbursed for all campaign expenses up to 56 billion won by the government and people who invested in the fund will be repaid with interest no later than Feb. 27, 2013.

Since the fund was launched Tuesday, 12,091 people have invested about 8.1 billion won.

Park also said approval ratings for Ahn in some polls appear to be declining after the rumor.

“We received some complaints from Jeolla saying a local office [of the DUP] is spreading the rumor about Ahn’s concession,” Park added.