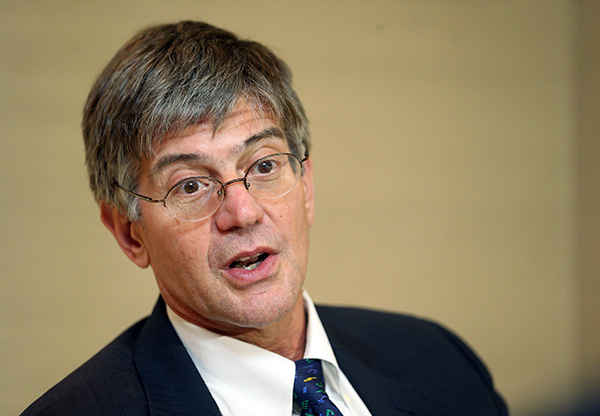 
James Steinberg, former United States deputy secretary of state, said Washington is open to resuming a serious dialogue with Pyongyang but North Korea should first understand the consequences of the breakdown of the agreement made earlier this year.

“There is a lot of disappointment [in the U.S.] that we were unable to move forward with the Feb. 29 agreement,” Steinberg said, in an interview with the JoongAng Ilbo and the Korea JoongAng Daily on Tuesday in Seoul.

“That was a great opportunity with the new leader [Kim Jong-un] and there are more explanations and speculations to why they fell apart but I would believe that the President and his team going forward would be open to going back to having a serious dialogue.”

Steinberg, who served as deputy secretary of state from 2009-11, was referring to the deal the U.S. struck with North Korea on Feb. 29 in which the nuclear-armed country promised to suspend nuclear missile tests and uranium enrichment in return for food aid from the U.S. The agreement, however, ended in April when the North launched a missile, breaking its promise. Washington-Pyongyang dialogue has been on ice since then.

“Everybody realizes that the best path [for the North’s nuclear disarmament] would be through an agreement and I think we just need to make it clear on the one hand that the U.S. and South Korea and others are prepared to move forward, but that North Korea has to do its part too,” said Steinberg, currently dean of the Maxwell School of Citizenship of Syracuse University.

The interview was conducted during his visit to Seoul to attend the three-day Korea Global Forum hosted by the Ministry of Unification under the theme, “Peace and Unification: Discussion on the Korean Peninsula.”

Steinberg, 59, shared his thoughts on a variety of pending issues, including the North Korean regime and the rising power of China based on his experience of being part of President Barack Obama’s first term administration.

Steinberg’s remarks were made at a critical time as Obama was re-elected last week and new leadership is expected in Seoul, Beijing and Tokyo. North Korea also had a regime shift to Kim Jong-un after his father, Kim Jong-il died in December, last year.

“There was a deep sense of disappointment, on the U.S. side, that we really made an effort with the new leadership [under Kim Jong-un],” Steinberg said. “I would guess it’s a natural human instinct to say after all that effort and the positive result that was achieved [in February] to have it tossed away by the North probably makes people not as enthusiastic as they might otherwise feel about resuming it.”

Steinberg added, “There’s a strong sense that somehow they [North Koreans] are trying to make the argument that we [U.S.] have to do all the work and they can just lay back until we solve all the problems.”

“The North Koreans can’t simply expect that somehow they’re the victims, and it’s the responsibility of South Korea and the U.S. to apologize to them and to act.”

With Obama’s re-election, heavy focus is on how he will deal North Korea, and specifically, if Washington will propose a dialogue with Pyongyang. What the U.S. wants, according to Steinberg, is some sign that the North has understood their role in causing the last agreement to break down and reassurance that the two countries will not repeat the same pattern of behavior.

“This [negotiating to resume dialogue] isn’t our own responsibility, to somehow beg and plead and bribe the North Koreans in to meeting their responsibilities to help solve problems which they are largely the source of,” he said.

Regarding Pyongyang’s new leader and reports that the regime is willing to open up its economy, the former state official said, “predictions” shouldn’t be made.

“We should recognize limitations of our understanding of what’s going on there and to try to shape our policy, not because we’re guessing whether he [Jong-un] is a reformer or not a reformer, whether he’s going to change the role of the military, or increase economic performance,” Steinberg said. “What we want to do is more shape his decision-making so that he makes a decision that is in our common interest, to provide the perspective, the willingness to engage as we did.”

While on his trip to Seoul this week, Steinberg also met with Foreign Affairs Minister Kim Sung-hwan and Unification Minister Yu Woo-ik. Without elaborating on the discussions he had with the ministers, he said, “I was just grateful to have a chance to have an up-to-date view about the current situation of the peninsula, their assessment of what’s going on in North Korea since Kim Jong-un took power.”

“It was a welcome opportunity for me as I have great interest and long-term engagement on these issues and was able to hear from old friends and colleagues about the current situation.”

Steinberg said he also discussed the upcoming East Asia Summit, which will be held in Cambodia later this month and attended by leaders including President Lee Myung-bak and Obama. The summit comes at a time when there have been mounting concerns in the Asian region over the rising power of China, both militarily and economically. China has grown to be the world’s second-largest economy after the U.S.

“They [U.S. and China] are clearly obviously in competition,” Steinberg said. “But that’s not a bad thing. Competition could be helpful. We have competitive relations in some respects with our closest allies especially on economic issues and nobody expects or anticipates that we’re going to agree with China on everything.”

Steinberg added that what’s important is that the two find ways to “manage those differences” and that they “keep our focus on the facts that sustain a constructive relationship.”

Introducing the often-used term during the cold war, “Trust but verify,” the former deputy secretary of state said, “What’s needed for China is to demonstrate through its actions as well as its words that it’s serious about what it has called its harmonious development and peaceful rise.”

China’s responsibility, according to Steinberg, is to “recognize that in the age of deep globalization and interdependence, we all need to work together to solve problems and that we can’t engage in zero-sum politics and zero-sum economics.”