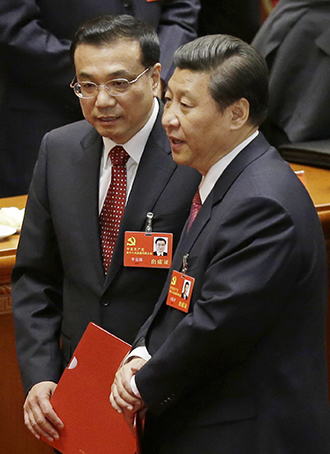 Chinese Vice President Xi Jinping, right, and Vice Premier Li Keqiang leave the closing ceremony of the 18th Communist Party Congress at the Great Hall of the People in Beijing yesterday. China’s Communist Party re-elected Xi and Li to its Central Committee yesterday as it moved to conclude its once-a-decade transfer of power. President Hu Jintao was not re-elected to the committee on the final day of the congress, clearing the way for Xi to succeed him - the fifth transfer of power in 63 years of communist rule. [AP/YONHAP]