Graphite tubes are seized in Busan

Graphite tubes are seized in Busan 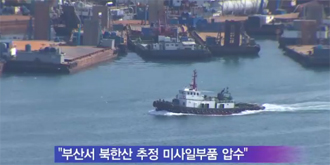 A Chinese ship bound for Syria carrying materials that could be used in ballistic missiles was seized by South Korean authorities in May in Busan, Japan’s Kyodo News reported yesterday, raising suspicions of North Korean weapon exports to the war-torn Middle Eastern nation.

The Chinese-registered freighter Xin Yan Tai was carrying 445 graphite cylinders that can be used to produce core components of ballistic missiles when South Korean customs officials inspected the cargo at the Port of Busan in May, the report said, citing sources at the UN.

The ship was transiting through the South Korean port.

“We seized [the ship carrying materials for ballistic missiles] at the Port of Busan,” a high-ranking South Korean government official told the JoongAng Ilbo yesterday, “and are currently keeping the materials.”

Concerns are mounting among UN diplomats that the cylinders were made in North Korea, Kyodo said, and were exported to a Syrian company with ties to North Korea.

Under UN Security Council resolutions 1718 and 1874, passed in the wake of Pyongyang’s first and second nuclear tests, the North is prohibited from trading military and weapons-related materials.

Japan’s Asahi Shimbun reported yesterday that the cylinders were disguised as lead pipes.

Graphite, an abundant resource in North Korea, can be used in ballistic missiles. The UN sanctions ban North Korean exports of graphite cylinders or tubes.

Kyodo said that the UN Security Council’s 1718 Sanction Committee submitted a regular report to the council on Monday that includes its investigation of the case.

The committee, composed of representatives of the five permanent members of the council - the United States, Britain, France, China and Russia - and a panel of experts from Korea and Japan, monitors North Korea’s violations of the sanctions and writes reports every November.

According to the China Classification Society, the Xin Yan Tai is owned by a shipping company based in Shanghai, Kyodo said. It was constructed in 2004 and registered in Shanghai.

If the ship belongs to a local company, China could come under fire for violating the UN sanctions.

A Ministry of Foreign Affairs and Trade official told the JoongAng Ilbo, “We can’t confirm any details until the procedure at the UN Security Council ends.”

Yonhap News Agency also said yesterday that the UN can’t confirm the case, and the final decision on whether Pyongyang violated sanctions will be made through a final report by the committee’s panel and discussions by the entire UN Security Council.

“North Korea has been exporting weapons worth about $200 million annually,” a South Korean diplomatic source told the JoongAng Ilbo. “And there have been many violations of sanctions by North Korea. So it’s still unclear whether the UN will put additional sanctions or a new resolution on Pyongyang because of this case.”