A few drugs to be sold at some 24-hour stores

A few drugs to be sold at some 24-hour stores 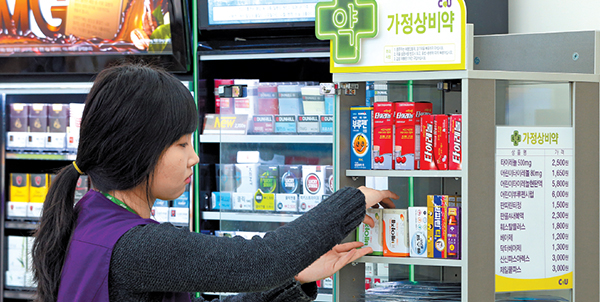 A worker arranges a paltry selection of over-the-counter drugs on a shelf yesterday at a convenience store in Dongsung-dong, Jongno District, Seoul, after the Ministry of Health and Welfare allowed some convenience stores to sell 11 types of mild remedies like Tylenol from today. [YONHAP]


A handful of routine drugs like cold medicines and painkillers will be available at half the convenience stores in Korea starting from today.

But prices will be as much as one-third higher than in pharmacies.

Convenience stores authorized to sell the drugs will display signs.

In May, the National Assembly passed legislation to allow over-the-counter drugs to be sold outside pharmacies to allow consumers an easier way of buying common remedies like digestive pills.

But the pharmacies have fought a desperate battle to block the deregulation and won at most stages.

Two additional products, Tylenol 160-milligram and Festal Gold, will be available by next February.

The drugs are still not going to be sold in supermarkets and the ministry won’t say when they might.

Before the revision of the Pharmaceutical Affairs Law, the sale of over-the-counter drugs outside of drug stores was prohibited.

Over the summer, the Health Ministry reviewed the safety of hundreds of drugs to come up with the current list. It says it plans for more drugs to be introduced.

The Korean Pharmaceutical Association’s official objection was that over-the-counter sales could endanger the public. It claimed that pharmacists take full responsibility for the public’s health under the old system.

The ministry has respected that idea. “In order to prevent abuse of the drugs through distribution in convenience stores, we will cooperate with local governments and employ pharmacists to monitor the system,” stated Kim Weong-jong, a senior health care policy official at the ministry yesterday.

“If necessary, we will seek further surveillance measures with the Korean Pharmaceutical Association,” he said. He also said that most people who buy drugs at convenience stores will be people who need them while traveling or late at night when pharmacies are closed.

The drugs sold at convenience stores will be as much as a third more expensive than in pharmacies.

In addition, over 10,000 convenience store workers will be sent for training by the year’s end in basic safety regulations and sales procedures for the OTC drugs, such as how to store the drugs and their age limits.