Young guns get their shot in loss to Australia

Young guns get their shot in loss to Australia 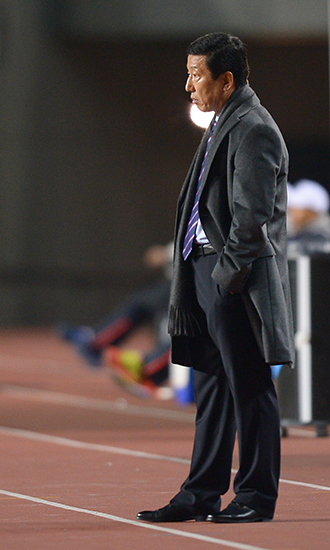 National football team coach Choi Kang-hee brushed aside his disappointment after a 2-1 loss at home in a friendly versus Australia on Wednesday night, standing by his decision to test younger players and look down the road at the future of the Taegeuk Warriors.

Seventeen players on the 18-man roster, many of them young or typically on the bench, played during the match. Only goalkeeper Jung Sung-ryong remained on the sidelines.

“I am sorry for a loss in the match, but I could see some players showed better performances than I expected,” Choi told reporters after the match, held at Hwaseong Sports Complex in Gyeonggi.

The friendly - the last international match before Korea takes on the remaining four World Cup qualifiers beginning in March - was played just before a Group A bout between Uzbekistan and Iran, tightening the race for the berths to the quadrennial event.

Uzbekistan beat Iran 1-0 to spring atop the group with eight points, one point ahead Korea with one more game played. Also early yesterday, Qatar edged past Lebanon 1-0 to rake in three more points.

Korea, Iran and Qatar are all on seven points, with Korea leading on goal differential. Korea has one more game left than the other Group A teams.

Korea has failed to win in its last three games, including a 2-2 draw with Uzbekistan in September and a 1-0 loss to Iran last month, but coach Choi said he expected the Australia match would turn into a blessing in disguise.

“I think now we have a larger pool of players that we can use next year,” Choi said.

Lee Seung-gi, a left-wing midfielder, showed potential to fill in for Kim Bo-kyung of Cardiff City as his restless run in search of a goal finally bore fruit with a cross for Lee Dong-gook’s strike.

Defenders Kim Kee-hee and Hwang Seok-ho, who both made A-match debuts, also received the nod from Choi.

Left back Choi Jae-soo and right backs Shin Kwang-hoon and Kim Chang-soo, however, failed to hold down the back line, although they looked sharp on the attack.

Hwang Jin-sung was put in as an offensive midfielder to back up sole striker Lee Dong-gook.

He displayed his sharp passing ability, but coach Choi said Hwang, along with Ha Dae-sung, a defensive central midfielder, did not play their positions and isolated Lee for much of the game.

Korea got ahead first with veteran striker Lee Dong-gook’s volley in the 11th minute, before Nikita Rukavytsya offset it for Australia. Australian defender Robert Cornthwaite scored a go-ahead goal before the end of the first half.

With the opening goal, Lee Dong-gook, a much-maligned striker who was kept off the national team for an October World Cup qualifier against Iran, made a strong case for his inclusion in future matches.

Choi Kang-hee had questioned Lee’s fitness level and conditioning but decided to give him another chance for this match, and the 33-year-old responded with his 30th international goal.

Europe-based players from Korea were all excluded in the match. Australia, too, was missing some stars plying their trade overseas, including Tim Cahill of the New York Red Bulls in Major League Soccer and Brett Holman of Aston Villa in the English Premier League.