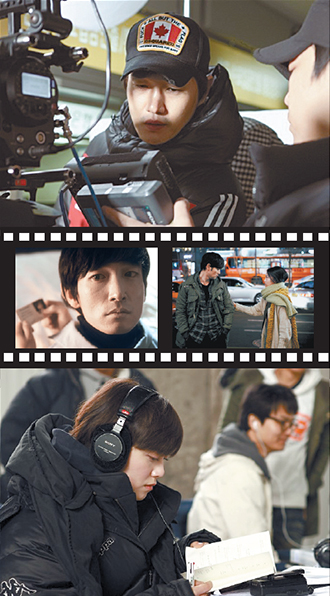 Actor Yoo Ji-tae, top, directs “Mai Ratima,” which focuses on a Thai woman, center right, who comes to Korea and ends up in a bad prearranged marriage. For her second feature film as a director, Ku Hye-sun, bottom, features Siamese twin brothers, center left, who compete for the affection of the same woman in “The Peach Tree” Provided by Movie & I and Yoo Movie

Hollywood star Ben Affleck, who directed “Argo,” is only one of many actors and actresses venturing into a new role, and Korea is no exception when it comes to actors taking their chances on the other side of the camera.

After directing a short, “You,” and full-length feature, “Magic,” actress Ku Hye-sun was smitten. She went on to study directing at Sungkyunkwan University.

“I think the most intriguing part of directing is that you get to do everything all together,” says Ku. “The process of creating a film is a comprehensive art form through which I can put all of my scattered thoughts together. That’s why I started to direct.”

“The Peach Tree,” which is currently in theaters, tells the story of Siamese twins competing for a woman’s affection. Sang-hyun (Jo Seung-woo) and Dong-hyun (Ryu Deok-hwan) are a pair of conjoined twins with two heads. Dong-hyun controls the shared body, except for his brother’s head attached to the back. In 30 years, these two have never met face-to-face.

Despite having the same body, the brothers share little else. While Sang-hyun is patient and generous, Dong-hyun is always questioning something and extremely selfish. As time passes, Dong-hyun begins to blame his brother, for his own unhappiness. While Dong-hyun lets his brother do whatever he wants, things change when his father invites artist Seung-ah (Nam Sang-mi) to help Dong-hyun publish a children’s book, one of his dreams for a long time.

“It’s tiring and grueling. At times I ask myself, ‘Why am I doing this?’ But movies make me feel alive,” said the 28-year-old director, who has established her own company, Ku Hye-sun Film. “I even kept losing more and more hair. Then I noticed that our director of photography also lost a lot of hair himself.”

His debut feature, “Mai Ratima,” premiered at this year’s Busan International Film Festival. “Mai Ratima” refers to a 22-year-old Thai woman (Park Ji-su) who flew to Korea through a mail order marriage with the mentally challenged Sang-pil (Lee Jun-hyuk). She was excited about coming to Korea, her husband’s family quickly takes advantage of her.

Mai’s mother-in-law forces her to do all the household chores, and brother-in-law Sang-rim (Kim Kyung) sexually harasses her. Amid emotional distress, Mai meets small-town drifter Soo-young (Bae Su-bin), who is in such dire straits that he cannot afford to renew his national ID. They fall in love and move to Seoul, where a different, but no less harsh, reality awaits.

On the surface, “Mai Ratima” might look like a conventional melodrama, but Yoo emphasizes discrimination against the ever-increasing number of Southeast Asian women who come to Korea for prearranged marriages.

When asked why he decided to feature a Thai woman as a main character, he says he wanted to delve into “the pain, desire and deficiency that love bears.”

“I wanted to portray seemingly insurmountable obstacles facing people who desire to make a difference and beat the odds,” he says. “I’d like viewers to reflect on how those people strive to make things better,”

Though Yoo had never been a director prior to “Mai Ratima,” he prepared for his role at the helm for a long time.

“The movie took me 15 years to complete,” he says. “I wrote the scenario when I was in college.”

Actor Ha Jung-woo turned to the comedy genre for his upcoming directorial debut in the tentatively titled “A Man and Typhoon.” The 34-year-old actor wrote the drama about airplane passengers who survive a storm on a flight from Tokyo to Gimpo International Airport.

“I’ve wanted to study more about film for quite a while, so I’m taking on this opportunity to don the director’s cap,” he says through his management agency, Fantagio.

His debut feature is scheduled to begin filming this month for release in the second half of 2013.