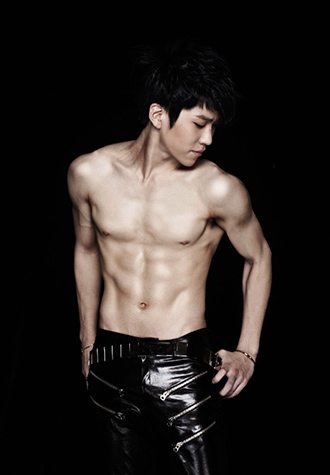 The last few days were an interesting couple of days for a couple of boy band members of K-pop and their fans too, no doubt.
On Nov. 15, Starship Entertainment released a picture of Boyfriend member Hyunsung’s new body: He recently lost five kilograms (11 pounds) and unveiled a six-pack to rival that of 2PM members.
Through its official Twitter page, Starship Entertainment said that, “He’s become a real Janus [god of new beginning in Greek mythology].”
The band released an album titled “Janus” back on Nov. 8.

At the other end of the spectrum, B.A.P’s youngest member Jello has apparently grown to 184 centimeters (six feet) from 182, which was his official measurement on his Naver profile.
On Nov. 13 Jello made the short announcement, “Measured myself: 184.”
His group member Youngjae tweeted back saying, “Stop it, think of the rest of us, too.”

Meanwhile, fans were shocked at the 17-year-old’s growth spurt and called him “giant baby” among other nicknames.
By Carla Sunwoo [carlasunwoo@joongang.co.kr]