Ha Jung-woo is a ‘Chaser’ in real life

Ha Jung-woo is a ‘Chaser’ in real life 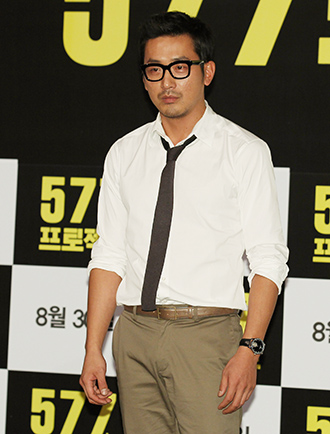 Ha Jung-woo, the star of the movie “Chaser” (2008), ran after and stopped a car that hit him and attempted to flee the scene.

His agency revealed on Wednesday that two days earlier, Ha was walking across a pedestrian crosswalk in Apgujeong, southern Seoul, at around 10:30 p.m. when a car driven by a man named Kim grazed the actor.

As the driver proceeded to speed away, Ha ran 200 meters (650 feet) after the vehicle, took down the registration number and alerted the police.

The authorities looked into the matter and said that Kim was unaware that he had hit Ha.

Fantagio Entertainment said that Ha was slightly injured and is currently settling the matter with the driver.

Ha is used to making headlines for different reasons. In March, the talented entertainer, who dabbles in the fine arts, exhibited his paintings at the Insa Art Center in Gwanhun-dong, central Seoul.

The main piece was a mix of pop art and expressionism.