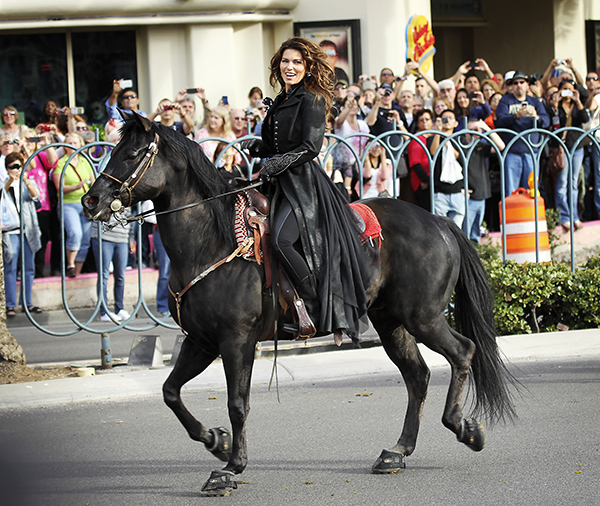 LAS VEGAS - Country music star Shania Twain arrived on horseback Wednesday for a two-year headline gig at Caesars Palace, parading up the Las Vegas Strip with a herd of 40 horses.

Promoters called the event a stampede, but hooves were kept to a steady, slow gait by nine wranglers who escorted Twain to a reception crowd of several hundred people in front of the famous Caesars fountains. Dozens more people watched from the sidewalk of the Flamingo resort across Las Vegas Boulevard.

“We could either lose a few hundred dollars inside or come out and see what kind of spectacle she puts on,’’ said Steve Huffman, a UPS manager who watched with his wife, Debi, from an overhead pedestrian walkway.

The couple was in town for his 52nd birthday and learned through a Twitter message that Twain planned to arrive on a horse. They identified Twain’s hit, “Man, I Feel Like a Woman,’’ as the country singer rode up the street, and they said they’ll plan to see the show next year.

“Still The One’’ blasted on speakers as Twain stepped onto a temporary outdoor stage near fountains made famous by events including daredevil Evel Knievel’s motorcycle crash during a stunt on New Year’s Eve 1967.

To some, Twain’s arrival echoed singer Frank Sinatra’s heralded arrival on a camel at the old Dunes hotel in September 1955.

Twain, 47, is touted as one of the best-selling female country artists of all time. The Canadian singer-songwriter has sold more than 75 million albums worldwide.

Las Vegas police, including several on horseback, diverted traffic on the busy casino corridor for about 30 minutes for the spectacle.