Kimchi makers to pay more for the pleasure

Kimchi makers to pay more for the pleasure 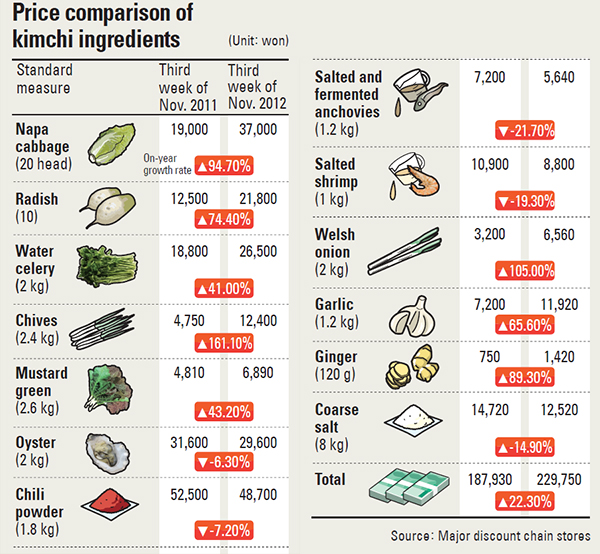 Households will have to pay over 20 percent more to make the nation’s favorite side dish this season than last year due to the rising costs of fresh produce, the retail industry announced yesterday as Korea heads into its annual kimchi-making season, known as gimjang.

Inflation has pushed the cost of making kimchi up 22.3 percent on average, meaning that a family of four will now spend an average of 229,750 won ($211.5) filling the fridge with the spicy, fermented red vegetable dish, up from last year’s 187,930 won.

The figure was calculated based on the prices of 13 essential ingredients at major discount chain stores yesterday, including Napa cabbage, radish, water celery, chili powder and salted fermented shrimp. Only five, including shrimp, chili powder and coarse salt, have not soared in price over the last 12 months.

Although inflation grew by just 2 percent last month, fresh produce saw a significant price hike increase over the same period, with the average price of vegetables up 19 percent due to heavy rains and typhoons this summer, according to a report by Statistics Korea.

Making kimchi spice is also more of a financial burden now than it was last winter.

Two Welsh onions, used for seasoning, sold yesterday for 6,500 won, twice what they cost last year, while a bunch of five chives were 2.6 times more expensive at 12,400 won. Other essential ingredients like garlic, ginger, water celery and mustard greens were also selling at inflated prices.

On the flip side, consumers benefited from a bumper crop yield of dried salted fish, which saw the biggest fall in price. They can now pick up 1.2 kilograms of dried salted anchovies for 5,640 won, down 21.7 percent.

Overall, however, this comes as bad news for the public as many households were expecting costs to drop this winter due to a heavy supply of Napa cabbage.

“Cabbage prices will be more expensive than last year after they stabilize at the end of this month,” said Choi Jeong-hwa, who works for E-Mart.

The Korea Rural Economic Institute conducted a survey suggesting that only 52.7 percent of households will make kimchi this year, down from 55.7 percent in 2011.

Hyundai Department Store said it is selling cabbages at a discounted price of 1,500 won until Sunday.