Splashing out to stay afloat

Splashing out to stay afloat 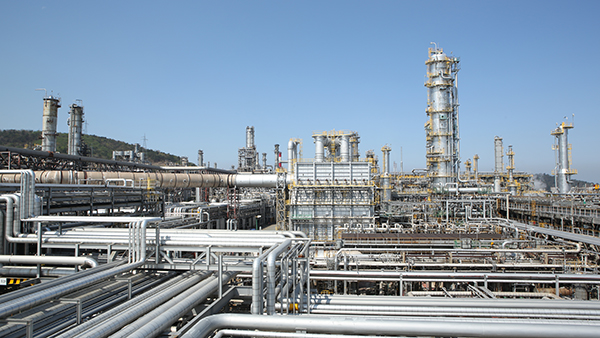 GS Caltex’s third fuel-upgrading facility was completed in 2010 in the company’s industrial complex in Yeosu, South Jeolla. Provided by the company


Increasing investment in facilities that upgrade low-quality bunker C to higher-quality products including kerosene, diesel and even gasoline have helped turn oil refiners’ operating losses into profits in the third quarter, despite the worsening global economy.

The nation’s four oil refineries, SK Innovation, GS Caltex, Hyundai Oilbank and S-Oil, have been constructing and expanding such facilities since the mid-1990s.

After spending to upgrade their systems in recent years, they can now turn 681,000 barrels of low-quality residue into more value-added petroleum products per day.

GS Caltex, the nation’s second-largest refiner, has been one of the most aggressive investors, having spent 5.8 trillion won ($5.33 billion) on its four plants. No. 4 is expected to be up and running next year. Once it is completed, GS Caltex will have the largest fuel-upgrading facility in the country with a daily capacity of 268,000 barrels.

Although it costs up to 2 trillion won to build one fuel-upgrading plant, companies say this is essential to remain competitive. Otherwise, bunker C and other oil residues, which account for up to 30 percent of crude oil, will go into waste, they argue.

“Many local oil companies have diversified their business portfolios and become exporters of petroleum products in a country which has no oil of its own,” said Lee Hyun-bok, manager of GS Caltex’s communications team.

An executive at the country’s third largest oil refinery, S-Oil, said “the simple refining process does not bring oil companies enough profits. Although a lot of financial input is necessary to build such facilities, companies that lack them will either fall behind or go under completely.”

Hyundai Oilbank has?two such plants based on a total investment of 2.6 trillion won. The second was completed in September last year. S-Oil has?one, which it spent?1 trillion won on, while SK Innovation has three. 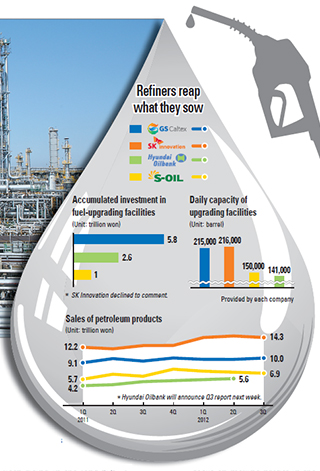 Lee of GS Caltex said it has been aggressively investing in the facility to achieve a better economy of scale.

“As petroleum products are different from cars or electronic devices, which require better functions or innovative designs to dominate the market, all we need to consider is if we can provide petroleum products at a lower cost while retaining some kind of margin,” he said.

Some 68 percent of its 12.8 trillion won sales for the third quarter derive from exports, it said.

Most of the oil refiners expect higher returns in the future as oil prices are expected to keep rising in the long run. A recent report by the International Energy Agency last week indicated that oil will climb to $125 per barrel by 2035 from prices ranging below $110 now.

“The higher it goes, the bigger margin we get from selling upgraded fuel products overseas,” said Lee.

Most outbound shipments go to China, Japan and Singapore.

“Although some worry the global economic slowdown may halt factory operations in those countries, causing a drag on exports, we haven’t seen much fluctuation,” said another industry source.

Energy experts say it is premature to fret about falling profits due to recent investment binges.

“It is impossible for those refineries to look 50 years or 100 years ahead as they have to focus on making profits in the near-term,” said Lee Dal-sok, managing director of the Korea Energy Economics Institute.

“As it takes a long time to produce petroleum products from drilled oil, and prices are likely to stay high, local companies will be able to stay in the black courtesy of their fuel-upgrading facilities.”

Lee dismissed talk of diminished exports as being groundless.

“Exports may not increase greatly, but as local companies have years of experience in upgrading fuel, and they have been streets ahead in terms of adopting efficient and eco-friendly processes, their client countries will keep demanding petroleum products from Korea,” he said.