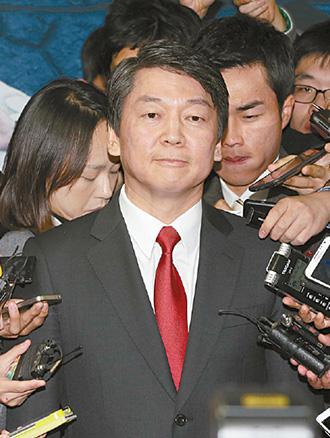 Independent presidential candidate Ahn Cheol-soo said he was “deeply disappointed” by dirty tricks played by the main opposition party during negotiations to try to agree on a single liberal candidate.

“I was deeply disappointed,” Ahn told reporters yesterday. “In candidacy negotiations, the process is more important than the result. If we [liberals] continue a competition only to win, we can’t triumph in the presidential election.”

Ahn didn’t say whether his aides would return to the talks, which were supposed to come up with a process to decide whether he or the Democratic United Party’s Moon Jae-in would stand down from running so the liberal vote wouldn’t be split.

Before Ahn’s comment, Moon apologized for any inappropriate acts by his aides.

“By any chance, if my camp’s people created problems for his camp or made them uncomfortable, I apologize,” Moon told reporters in Busan.

Song Ho-chang, Ahn’s spokesman, said at a press meeting yesterday that Moon didn’t seem to know what his camp was up to behind the scenes.

“Moon is not taking the situation seriously,” Song said. “He needs to clearly see what’s happening at this moment.

“We know suspending negotiations is disadvantageous to us,” he added. “But spreading false rumors by mobilizing party members is far from our principle of creating a new kind of politics.”

However, Ahn’s camp said Wednesday it was walking away from the talks because the DUP was spreading rumors through its networks that Ahn would give up his candidacy, which was affecting investments in the so-called Ahn Cheol-soo Fund, which is raising money for Ahn’s campaign.

Yesterday, Ahn’s camp told reporters that the DUP, which is the nation’s second-largest party with 1.9 million party members, was mobilizing its members to support Moon in opinion polls.

Some newspapers and TV stations yesterday released a screen grab of a mobile phone screen showing a text message allegedly sent to a DUP member. It read: “A series of important telephone polls will be conducted soon. They will last five to seven minutes. Please make sure to respond to the polls, and if you are out of the house, forward calls from the landline to your mobile phone.”

“As soon as I return to Seoul, I will figure out what happened and take all measures needed,” Moon told reporters on a trip to Changwon, South Gyeongsang, yesterday. “I ask him to vent his anger and come back to the negotiating table.

“I made phone calls twice to Ahn on Wednesday and yesterday to tell him this,” Moon said. “I don’t think he refused my apology.”