Prosecutors file warrant to detain one of their own

Prosecutors file warrant to detain one of their own 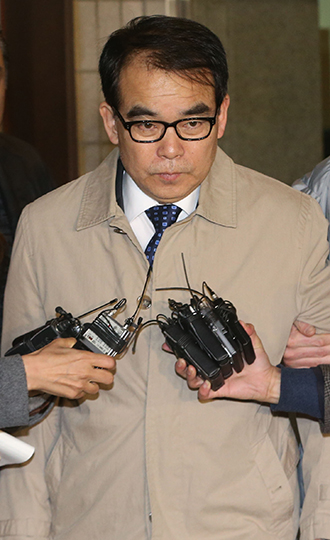 A team of special prosecutors filed a warrant to detain Kim Gwang-jun, a senior prosecutor at the Seoul High Prosecutors’ Office, who is suspected of taking hundreds of millions of won in bribes and is in the middle of a tug-of-war over the jurisdiction of criminal investigations between the prosecution and police.

The team of special prosecutors headed by Kim Soo-chang, 50, yesterday sought a warrant to detain Kim.

The National Police Agency has also been running a concurrent investigation into Kim’s activities, which is drawing attention to the fight for jurisdiction.

Allegedly, Kim first received 50 million won in cash from four or five EM Media officials when he was investigating the group’s irregularities at the Seoul Central District Prosecutors’ Office and received an additional 540 million won check directly from Yoo in 2010.

The special prosecutors said the 50 million won he received from the EM Media officials is related to Kim’s investigation into the Eugene Group’s mergers and acquisitions irregularities. It added that 540 million won was used for Kim’s jeonse (long-term deposit) house payment.

Kim is also suspected of investing in stocks of an affiliate of the Eugene Group with his three colleagues after receiving confidential intelligence from officials of the corporation.

“We submitted the request to the Seoul Central District Court,” prosecutor Jeong Soon-shin from the team of special prosecutors told reporters. “We found additional allegations aside from the bribery charge.”

Six high-ranking officials of the two investigation agencies including Jeong In-chang, the head of Planning and Coordination Department from the Supreme Prosecutors’ Office and Kim Hak-bae, chief superintendent general of the National Police Agency, met at a restaurant in Seoul yesterday to discuss how to handle their issues with jurisdiction, but the meeting did not reach a conclusion.

The police are complaining that the prosecution took away their case. They also suggested that the investigation authority must be assigned to the agency that first reports the case to the Korea Information System of Criminal-Justice Services, but the prosecutors were opposed to the suggestion.

Aside from the meeting, the Intelligence Crime Investigation Team under the National Police Agency sought a warrant to seize Kim’s bank account. But the prosecution predicted that the warrant would not be issued because the investigation report submitted by the police was poor in quality.