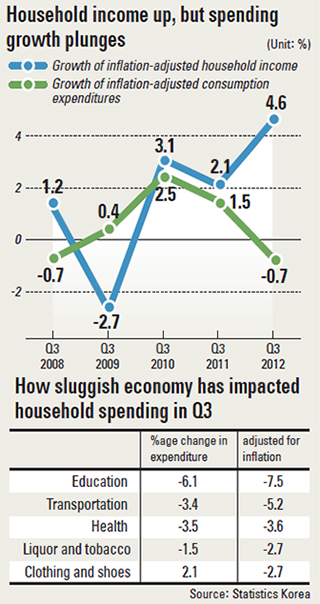 Annual growth of monthly household income surged in the third quarter compared to the same period a year earlier, but consumption grew at its slowest pace in more than three years, according to data released by the Statistics Korea yesterday.

Households with two or more members earned 4.14 million won ($3,800) a month in the third quarter, up 6.3 percent from a year earlier.

“Earned income, which makes up 67 percent of household income, grew by 7.8 percent in the third quarter, and this has pushed up overall household monthly income,” said Park Kyeong-ae, an official at Statistics Korea.

“This is due to the improved employment market as the number of employees in the third quarter grew by 506,000 compared to the same period in the previous year.”

Their spending, however, only went up by a mere 1 percent over the cited period to average 2.46 million won per household each month.

Inflation-adjusted household income rose 4.6 percent during the July-September period, but inflation-adjusted consumption expenditure fell 0.7 percent in the same period. Statistics Korea said this is the first decline in three quarters, suggesting that people are tightening their purse strings despite fatter incomes in a bid to weather the prolonged economic slowdown.

The news came after the Bank of Korea recently cut its economic growth estimates for this year to 2.3 percent, or 3.2 percent for 2013. The central bank forecast consumer spending will increase 1.7 percent this year.

If household expenditure is broken into 12 categories, education was the hardest hit as inflation-adjusted growth stood at minus 7.5 percent, followed by transportation, down 5.2 percent, health (minus 3.6 percent), clothing and shoes (minus 2.7 percent), and liquor and tobacco (minus 2.7 percent).

Monthly telecommunications bills grew 10.8 percent in the latest quarter due to the increasing use of, and dependence on, smartphones.

The Ministry of Strategy and Finance said households cut their spending on health care at the same time the government lowered the prices of pharmaceutical products by up to 14 percent from April.

It added that monthly education spending plunged partly due to the government’s expanded financial aid for day care centers for children younger than 5, which were opened to all households from January. But many consumers have questioned the credibility of the government figures.