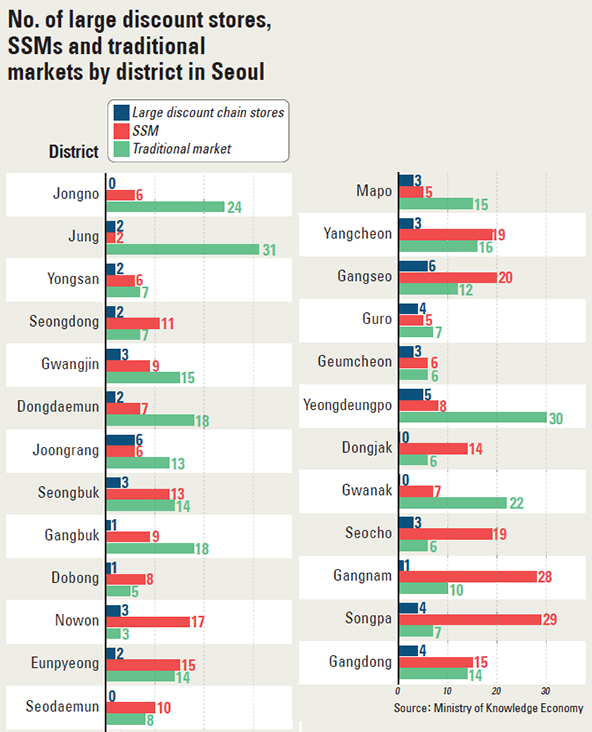 Large retailers vented their fury as politicians passed the Distribution Industry Development Act at the National Assembly yesterday, only a day after large retailers voluntarily met with representatives of small business owners and traditional markets at the Ministry of Knowledge Economy to discuss strengthening business regulations.

As the National Assembly passed the amendments to the bill submitted by the Knowledge Economy Committee under the National Assembly yesterday, large retailers showed their strong opposition, saying that reinforcing the regulation would be a death sentence amid the current downturn in consumption.

The gist of the revised bill was to extend the current limited operating hours between midnight and 8 a.m. to between 10 p.m. and 10 a.m., adding an additional four hours. It also expanded the number of days on which stores must close each month from two to three.

Some large retailers expressed their regret over the bill, saying that it does not consider the inconvenience of consumers and they are ready to take legal action against it.

Large retailers claim they have also been hit with sluggish earnings due to the downturn. With consumer sentiment frozen, the potential for their earnings to improve is considered unlikely in the short term.

According to monthly sales trends at three large discount store chains - E-Mart, Homeplus and Lotte Mart - released by the Ministry of Knowledge Economy, their sales have maintained a steady decline.

Sales of the three large discount store chains increased slightly last October, the first time in six months, thanks to the nation’s largest holiday Chuseok, but it is unlikely to lead to sales growth, the retailers said.

With the end of the increased demand during the holidays, large retailers are expecting a continued decline in sales from November.

E-Mart’s margin of Earnings Before Interest, Tax, Depreciation and Amortization (Ebitda) for this year is expected to decrease by 9.6 percent from a year earlier to 9.1 percent.

The backlash among large retailers was even greater this time than in the past, as the National Assembly took out the revised bill as a forcible card while the big retailers voluntarily agreed not to open new stores in cities and to seek ways to protect traditional markets and mom-and-pop stores.

They vowed not to open new stores in cities with populations smaller than 300,000 by the end of 2015 and close their stores for two days a month on weekdays from next month to give smaller rivals a chance to increase their sales as part of the government’s “shared growth” policy. They agreed to meet again next month to discuss additional issues.

“It is difficult to understand the current situation of politicians pressuring large retailers with the bill while they autonomously discussed ways to achieve share growth,” said Koo Do-yeon, a spokesperson for Homeplus.
By Kim Jung-yoon [kjy@joongang.co.kr]