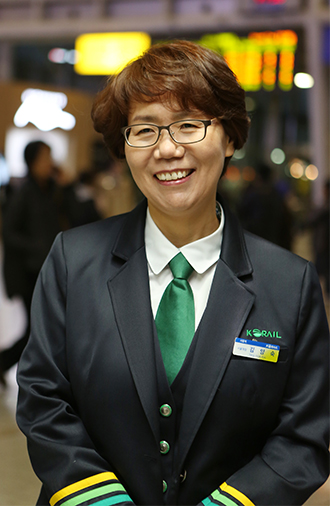 “As many people associate Korail [Korea Railroad Corporation] with Seoul Station, I feel a great responsibility that I have to shoulder as a stationmaster here,” said Kim Yang-sook, who was appointed by Korail on Monday to head the country’s busiest and most-visited train station. Her appointment has drawn interest from the public, as the 44-year-old is the first woman to serve in the post in Seoul Station’s 112-year history.

“I will work to make sure that, as much as possible, the station reflects Korea’s traditional values,” she told the JoongAng Ilbo on Sunday.

Kim, a veteran with 25 years’ service at the state-run railroad operator, formerly served as the chief of Seodaejeon Station, in Daejeon, and director of Korail’s public relations affairs and strategic team.

However, her new job is considered a higher profile position, as over 300,000 people pass through Seoul Station daily. It also accounts for 16 percent of the railroad company’s annual earnings with about 480 billion won ($441.6 million).

“Kim is very well known at Korail for her gung-ho spirit and passion for her job,” said Kwon Seong-joong, a management supervisor at Korail. “We expect her to be very successful and lead efforts to renovate the country’s biggest train station.”

Kim has already demonstrated her capabilities by taking charge of a project to improve the designs of all of the nation’s railroad stations. Kim has a master’s degree in business administration from Daejeon’s Hannam University.

When asked about the highlight of her career, Kim said it occurred in 2004 when she was part of a team responsible for introducing a merit-based salary system, a drastic change from the railroad’s decades-old seniority-based system.

“It wasn’t easy to get the support of Korail members and change a deeply rooted corporate culture,” she said. “ But we finally managed it through extensive discussions and rigorous preparations, and in the end, we were not obstructed by any opposing forces within the organization.” Kim now aims to transform the country’s busiest train station into one that is more convenient and an attractive place to visit.

“I want to give people the feeling that Seoul Station is a comfortable place that they would enjoy visiting for its cultural values, not just somewhere they need to go to catch a train.”