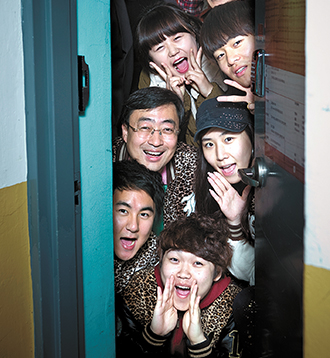 “Hi, I’m Kim Doe-sik, a philosophy major. I hope we get to know each other better.”

This was a text message that Song Yeong-rok, now a sophomore philosophy major at Konkuk University, received before he started freshman year classes.

On the first day of class, Yeong-rok was speechless when he realized Doe-sik was the professor standing at the podium. He started to apologize, and some other students joined him.

Professor Kim smiled at them. “It was me who didn’t tell you I’m a professor,” he said.

Kim. 48, is a legendary figure at Konkuk University, known as the eccentric professor, but in a good way.

He roams the campus in a leather jacket with a leopard pattern, which has become the philosophy department’s uniform. During office hours, he’s often seen by students carrying a teddy bear. He often makes surprise visits to philosophy majors’ rooms to play guitar and sing.

Places in Kim’s “Understanding Philosophy” course fill up quickly every semester. Plaintive messages on the student bulletin board beg for students to surrender their places in the class.

On his personal Web site, Kim has a feature called “Buy me lunch” that students can sign up for. Every year, Kim buys lunch for an average of 150 students. Each lunch involves two to three hours of conversation. He’s been doing it since 1999.

He listens to the students’ thoughts and pitches questions like, “So how are you feeling these days? Don’t you feel lonely?”

Moon, a 28-year-old student, shed tears when Kim asked these questions. Moon entered the university’s college of liberal arts after he failed to get good enough scores on the College Scholastic Ability Test to get into a law school. Moon’s father wanted him to become a lawyer.

“I took the college entrance exam four times because I wanted to meet the expectations of my father, who failed the bar examination himself,” Moon said. “But I will go my own way from now on.”

Kim doesn’t give solutions to students’ problems. He only guarantees two things: that he won’t judge them and that he’ll keep anything they say confidential.

“What I keep asking students is what they really want in their lives,” Kim said.

Kim is a son of Kim Tae-gil, a late emeritus professor of Seoul National University who served as the president of the National Academy of Sciences.

“My father focused on bringing changes to society,” Kim said. “But I focused on being a mentor for students in real life.”