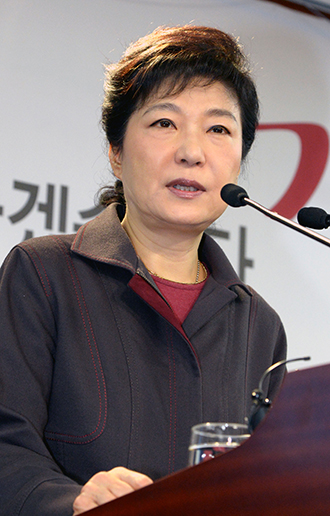 But she did say the conglomerates should give smaller companies a break.

“Large companies should sacrifice by bravely stopping [activities] that have threatened mom-and-pop stores and traditional markets,” Park said yesterday at a press conference at the party headquarters in Yeouido, western Seoul.

“[If I become president], I will do my best to straighten out market order and [create a society] in which everyone coexists.”

As part of her so-called economic democratization policies, the 60-year-old introduced 35 ways to boost small- and medium-sized enterprises (SMEs) and the economically vulnerable and to better distribute wealth.

They include reducing discrimination against nonsalaried contract workers, discouraging large companies from going into businesses or industries dominated by SMEs, stopping unfair practices by large retailers toward suppliers, and keeping large retailers from competing with small merchants.

Conspicuously missing in her platform, however, were the strong conglomerate reform measures that have been suggested by Kim Chong-in, who leads Park’s economic democratization campaign.

Kim, who now serves as chairman of the ruling party’s special committee on people’s happiness, is a reformist economist who has called for sweeping regulatory control over big companies.

The conservative presidential candidate yesterday did not demand limits to cross-shareholding arrangements in business groups.

Park said that there’s no need to create a new law to govern the chaebol.

“The proposed legislation [a new law over conglomerates] may not work well with current laws,” she said.

“It is necessary that we allow big businesses to boost growth and compete with foreign rivals and create more jobs,” Park said. New economic policy measures could hamper local firms from competing against foreign companies.

“Instead of introducing new laws and regulations, existing guidelines should be updated,” she said.

Her pledges on economic democratization are seen as falling short of what hardliners in the ruling party have called for, including Kim Chong-in.

Party insiders said the pledges announced by Park yesterday show she has drawn the line with Kim.

There is also speculation Kim will eventually leave the campaign. He wasn’t at Park’s press conference yesterday.