SNU probe says Ahn did not copy any of his theses

SNU probe says Ahn did not copy any of his theses 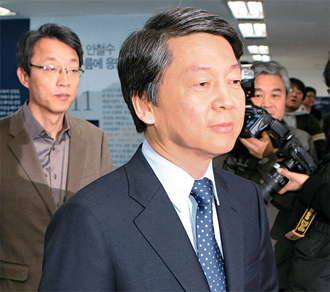 An SNU special ethics panel team, which was formed at the request of a lawmaker of the ruling Saenuri Party on Nov. 31, announced the result yesterday of a preliminary probe into allegations of plagiarism against Ahn, 50, and said the entrepreneur-turned-professor adhered to a proper code of conduct as a researcher in his academic work.

Based on the preliminary probe results, SNU closed the case.

A total of five academic papers written between 1988 and 1993 for Ahn’s master’s and doctoral degree in medicine at SNU were closely studied by the panel.

“After closely reviewing the five academic papers by Ahn, we have come to conclude that we will not require a full-fledged investigation into alleged plagiarism charges,” said the panel in a statement.

Regarding charges that Ahn used parts of others’ work without proper attribution for his doctoral thesis submitted in 1991, the special panel said it “does not violate research ethics.”

It said Boltzmann’s equation, which Ahn cited in his paper, “has been universally used for academic papers without attribution.”

SNU formed the panel in response to plagiarism allegations raised by Representative Min Byung-joo of the ruling Saenuri Party during a state audit on the school last month.

With SNU clearing Ahn, a backlash is possible against the campaign of the Saenuri Party’s Park Geun-hye with the presidential election less than five weeks away.