Prosecutors find one of their own called off probes

Prosecutors find one of their own called off probes 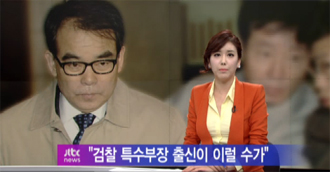 The team of special prosecutors investigating Kim Gwang-jun, a senior prosecutor accused of taking hundreds millions of won in bribes, has found that Kim called off investigations of Eugene Investment and Securities in 2008 when he worked in the Seoul Central District Prosecutors’ Office.

Kim, a senior prosecutor at the Seoul High Prosecutors’ Office, is suspected of receiving 240 million won from Cho Hee-pal, a pyramid scheme con man, and 590 million won from EM Media, an affiliate of the Eugene Group through a bank account opened by Cho’s aide, surnamed Choi, 57.

According to the special prosecutors, Kim was running preliminary investigations about irregularities at Eugene Investment and Securities, but suddenly stopped the operation.

“We judge that Eugene Group gave the bribes to cover up incidents that are related with the group’s mergers and acquisitions,” a spokesman for the prosecution told reporters.

The special prosecutors also found additional bank accounts that Kim is suspected of using for bribes from other people.

“The special prosecutors found two or three additional bank accounts,” a spokesman for the prosecution said.

The special prosecutors found that Kim received 100 million won from a corporation through a female official’s bank account, and they are trying to find out why the money was given.

The Seoul Central District Prosecutors’ Office also said they have rejected a request by the Intelligence Crime Team under the National Police Agency for a warrant to confiscate one of Kim’s bank accounts.

By law, a request of warrant filed by police gets submitted to a court through prosecutors.

The prosecution and police are in a bitter tug-of-war as to who will investigate the Kim case. The police began the investigation.

“The investigation report submitted by the police was too poor in quality,” a spokesman of the Seoul Central District Prosecutors’ Office said. According to the prosecution, Prosecutor General Han Sang-dae will have meetings with high ranking officials nationwide next Thursday to discuss the current conflict between prosecutors and police.

“He [Han] will speak frankly with prosecutors about the Kim issue and the investigation system because calls for reform of the prosecution are getting louder,” a spokesman of the Supreme Prosecutors’ Office told the JoongAng Ilbo.