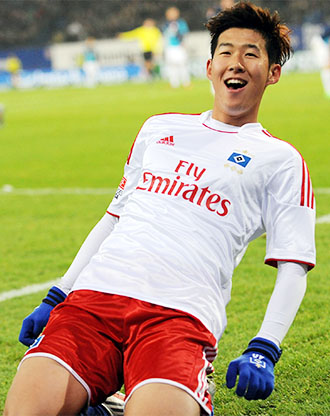 Son Heung-min scored his sixth goal of the season in the second half Saturday, leading Hamburg SV to a 1-0 victory over FSV Mainz 05.

Koo Ja-cheol, another Korean in the Bundesliga, scored his first goal of the season for FC Augsburg in a 4-2 loss to Eintracht Frankfurt.

Park Ji-sung, captain of the Queens Park Rangers, missed his fourth straight match with a knee injury, as his team succumbed to Southampton 3-1 in a duel of the two worst English Premier League clubs. QPR is the only Premier League side without a win.

In the match held at Imtech Arena in Hamburg, Son, 20, broke the deadlock in the 63rd minute as he connected a volleyed cross by midfielder Maximilian Beister from the left wing. The victory, the club’s fifth, moved Hamburg up to eighth in the 18-team Bundesliga, trailing Mainz on goal difference.

Son has six goals through 12 games, seventh best in the league, and surpassed his season best of five set last year. It was his first goal in three games since he scored Oct. 27 against Augsburg, which rested the injured Koo in the match.

Koo, 23, who was captain of the Korean Olympic team that won a bronze medal in London, scored in the first injury time in Saturday’s match at Commerzbank Arena. Frankfurt won, thanks in part to an own goal by Augbsurg’s Sacha Molders, and Augsburg remained in last place with a one win, eight losses and three draws.

In other Bundesliga action, Bayern Munich’s stellar run may have come to a halt with a 1-1 draw at lowly Nuremberg, but the league leaders still managed to extend their advantage to eight points after Schalke 04 lost, 2-0, at Bayer Leverkusen.

In England, Mark Hughes said he would not resign as Queens Park Rangers manager despite the home loss to Southampton on Saturday.

“I don’t run away from challenges, and this is a huge challenge,” said Hughes, who took over in January. “I knew [the job] was going to be problematic, but this year we had real expectations and I was quite prepared to raise expectation as I thought we’d have a good season. It hasn’t happened for us, unfortunately.”

QPR’s Malaysian owner Tony Fernandes, who has splashed serious cash on new players, wrote on Twitter: “I feel gutted. I have put my heart and soul into this with my other shareholders. And done all we can to give support to players and all management. I can only apologize to the QPR fans. We keep fighting.”

The Rangers have four points from 12 games, five points behind 17th-place Reading.

Manchester United was humbled 1-0 by Norwich City and Chelsea was upset 2-1 at West Bromwich Albion on Saturday as champions Manchester City took advantage of their rivals’ mistakes with a 5-0 demolition of Aston Villa.

In Spain, Barcelona pulled six points clear of Atletico Madrid at the top of La Liga when Lionel Messi netted his seventh double of the campaign Saturday and set up Alex Song to open his account for the club in a 3-1 success at home to Real Zaragoza.

World Player of the Year Messi took his league tally for the season to 17 with a pair of beautifully executed finishes as unbeaten Barca moved on to 34 points from 12 matches.

Atletico had 28 points ahead of their game at Granada yesterday, while third-place Real Madrid closed to within two of their city rivals when they crushed visiting Athletic Bilbao 5-1 on Saturday.

After Jon Aurtenetxe’s early own goal, Karim Benzema, Sergio Ramos, Mesut Ozil and Sami Khedira were on target as Real won for the seventh time in eight games.