U-19 squad is Asian champion

U-19 squad is Asian champion 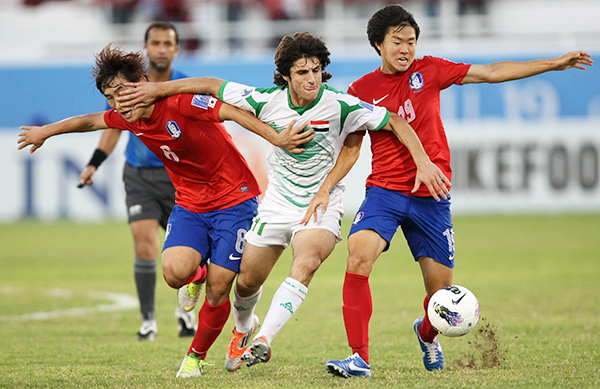 
Moon Chang-jin scored a dramatic equalizer in stoppage time and goalkeeper Lee Chang-geun made key saves as the young Taegeuk Warriors beat Iraq, 4-1, in a penalty shootout Saturday in the final of the Asian Football Confederation U-19 Championship.

Korea collected 12 wins on its way to its first title since beating China, 2-0, in the 2004 final in Malaysia.

“I am grateful for the players, who did not give up when they trailed 1-0,” said Korean coach Lee Kwang-jong. 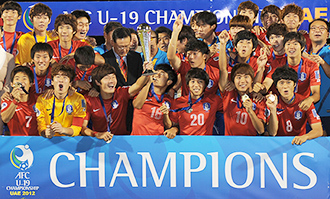 The Korean team celebrates after a dramatic victory over Iraq in the AFC U-19 Championship final Saturday at Emirates Stadium in Ras al-Khaimah, Saturday. It is Korea’s 12th title and the first since 2004. [AFP/YONHAP]

Mohanad Abdulraheem got Iraq on the board with a 35th-minute goal, his fifth of the championships. But Iraq’s hopes for a sixth title were dashed by Moons’s goal three minutes into the second injury time, forcing the extension.

After the two sides failed to decide the winner during the 30-minute extension, goalkeeper Lee denied Iraq’s second penalty attempt by Abdulraheem and the third Iaqi shooter, Saif Salman, sent his kick wide of the goal.

The championship surprised some who had dismissed the 2012 squad as ordinary due to its lack of star players.

Park Chu-young of Celta Vigo led Korea to the 2004 title and other up -and-coming strikers tried to follow suit. Korea finished third in all three previous events, led by Ki Sung-yueng of Swansea City and Lee Chung-yong of the Bolton Wanderers in 2006; Koo Ja-cheol of Augsburg and Kim Bo-kyung of Cardiff City in 2008; and Ji Dong-won of Sunderland in 2010.

The 19-year-old Moon was one of the leaders of the 2012 team at its leading scorer with four goals.

Moon, who turned professional early this year with the Pohang Steelers, has been limited to three games so far, while Kim Hyun, another striker for Lee’s squad, was also given only one game to play with the Jeonbuk Motors this year.

Goalkeeper Lee, who assumed the captaincy of the team, has not played a game for Busan I’Park.

Lee’s squad started slowly, losing 1-0 to Thailand in its first qualifying game last year. It managed to secure a berth to the final Round of 16 with three straight victories, including a 1-0 triumph over Japan.

Coach Lee said he will work toward developing a stronger team when with a goal of getting past the Round of 16 during the FIFA U-20 World Cup in Turkey next year. Korea earned a ticket to the World Cup with the three other top finishers in the AFC U-19 Championship.

“The level of the players on the international stage is high, so I think I will have to lift up each of our players in terms of technique and power,” Lee said. “I will try my best to supplement what we lack during the remaining period.”