40 years on, ‘Rocket Man’ still a blast for John

40 years on, ‘Rocket Man’ still a blast for John 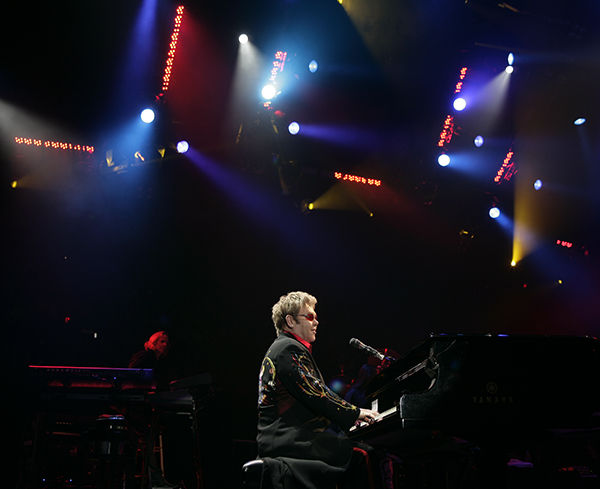 
The “Rocket Man” singer is landing onstage in Seoul on Nov. 27. Sir Elton John, 65, who is expecting a second baby early next year with his partner David Furnish, is on a world tour to celebrate the 40th anniversary of “Rocket Man.” But don’t get your hopes up to see him in one of his bizarre costumes: The English singer, composer, pianist and occasional actor says he doesn’t dress up anymore. Rather, he’s expected to be in a “beautifully cut suit [rather] than spandex tights.”

In his four-decade career, John has sold more than 250 million records, making him one of the most successful artists of all time. His single “Candle in the Wind 1997” has sold over 33 million copies and is the best-selling single in the history of Billboard.

The artist was named a Commander of the Order of the British Empire in 1996 and heavily involved in the fight against AIDS since the late 1980s. John received a knighthood from Queen Elizabeth II for “services to music and charitable services” in 1998.

The star says music means everything to him and that if he were not a musician, he would be just as happy as an assistant in a record shop.

Prior to his first Seoul concert in eight years, the Korea JoongAng Daily interviewed John via e-mail.

Q. What does the song “Rocket Man” mean to you?

A. I first visited Korea in September 2004 for a concert at the fantastic Seoul Olympic Stadium. It was a privilege to play in this vibrant country, and I am very much looking forward to revisiting.

When I was a boy, Dan Dare was a comic book hero, and space travel was just a romantic idea, not a reality. I was 14 years old when Yuri Gagarin became the first man in space; my songwriting partner Bernie Taupin was just 11.

Bernie and I did not meet until 1967, and two years after we met, Neil Armstrong became the first man to step onto the moon.

Our generation was smitten with the glory and excitement of space travel. “Rocket Man” - and indeed “Dan Dare” on the “Rock of the Westies” album - came from those boyhood dreams of traveling beyond the stars and looking back on Earth.

Not long after the “Rocket Man” single was released, my band and I were invited to NASA headquarters in Texas and shown around by Al Worden, the Apollo 15 command module pilot. It was thrilling to find that real astronauts liked our song, which was about an imaginary astronaut.

In April 2012, I heard that European Space Agency astronaut Andre Kuipers had made a special point of playing “Rocket Man” in the International Space Station on the song’s 40th anniversary.

So on April 17, the anniversary of its release around the world, I played “Rocket Man” during my “Million Dollar Piano Show” in Las Vegas, and later sent a recording of that performance to the astronauts at the European Space Agency.

So, yes, I have huge affection for “Rocket Man” and for the magic and excitement of space travel that Bernie Taupin’s lyrics convey.

You’ve worn numerous costumes ranging from Disney characters to Marie Antoinette. How many costumes do you think you have worn?

I really have no idea how many costumes I have worn ? it must be hundreds, if not thousands. Why did I start this? Because I could! I had a fairly conformist childhood and so the idea of getting on stage in completely outrageous clothes was quite alluring.

I don’t have a favorite costume, although most people would probably think that the Donald Duck outfit I wore in Central Park, New York, in 1975 was the most outrageous. I don’t dress up anymore because I am 65-years-old and I would far rather be in a beautifully cut suit than in spandex tights. Having said that, my current stage suits do feature some fabulous artwork and thousands of crystals.

You are also devoted to your Elton John AIDS Foundation. Why did you start it and what does it do? And what does the foundation mean to you?

I am proud of the achievements of the Elton John AIDS Foundation. We are one of the world’s leading nonprofit HIV/AIDS organizations, and so far have raised more than $275 million to support programs in 55 countries. However, as anyone who works with charities knows, there is always so much more to do, so we are never complacent about our achievements.

I also try to help other charities when I can, especially those that my friends are involved with. If I can help them raise a lot of money for a very worthy cause, then I am happy.

You were knighted by the queen. What does this honor system mean to you? I heard that after you are notified, you are not supposed to tell anyone.

I was knighted by Queen Elizabeth II in February 1998. The award was given in recognition of my services to music and to charity, which pleased me greatly. As a proud Englishman, I do consider the knighthood a huge honor and will always remember that special day when I went to Buckingham Palace with my family to receive the award. It was difficult to keep the news secret until the official announcement, but somehow I managed to do so.

What are you plans for the near future?

After I leave Korea, I am playing in Hong Kong, China, Taiwan, the Philippines, Singapore and Thailand. Then I return to London to spend Christmas at home with David and Zachary. Zachary will be 2-years-old on Christmas Day, so it is an extra-special day for the three of us.

Do you have a theme for the upcoming Seoul concert?

The show will be a combination of the big hit singles and much-loved album tracks. I can guarantee that everyone who attends will know many, if not all, of them.