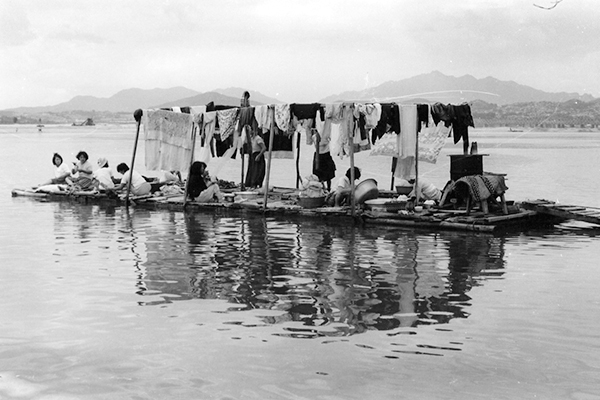 A photo taken in 1966 shows homemakers washing clothes at a wash site on Ttukseom Island in northeastern Seoul.


It’s hard to even imagine someone washing clothes in the water of the Han River, which traverses the heart of Seoul. But this was an everyday scene just four to five decades ago.

Visitors of the 2012 Seoul Photo Festival, which starts on Wednesday, will see how much Seoul has changed through a 1966 photograph on display in the exhibit at the Seoul Museum of Art in central Seoul. The photo captures the scene at the famous washing site on Ttukseom Island in northeastern Seoul. 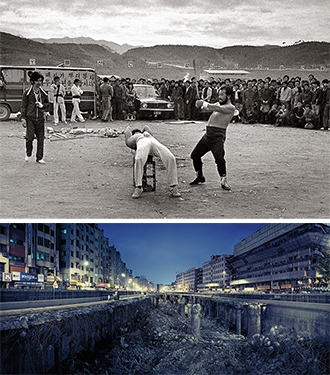 From top: A photo taken in 1977 shows two strongmen performing a show of “super powers” at what is now the Seoul Express Bus Terminal in Seocho District, southern Seoul. Fine-art photographer Ahn Se-kwon’s 2004 photo shows the renovation of Cheonggye Stream. Provided by the Seoul city government

The third edition of the annual photo exhibition will be held by the Seoul Metropolitan Government under the theme of “Village Community and Photo Archives” at a total of 23 venues across the capital. The venues include the Seoul Museum of Art’s main building near Deoksu Palace, its branch building near Gyeonghui Palace, the Seoul Museum of History adjacent to it and Seoul City Hall, all in central Seoul.

The main exhibition, divided into two parts, will be held at the Seoul Museum of Art’s main building. Part one will feature 250 photos by 21 photojournalists and fine-art photographers that show both the past and present of Seoul.

Jeon Min-jo, a veteran photojournalist who has captured images of Seoul for more than four decades, is one of the participants. Among his works on display is the famous photo that captures Apgujeong-dong in Gangnam District in 1978.

In this area, now known across the world thanks to YouTube sensation Psy, a farmer is seen plowing fields with a cow with new apartment buildings rising high in the background.

Fine-art photographer Ahn Se-kwon, whose spectacular images of contemporary Seoul, including those of the Cheonggye Stream under construction in 2004, show the bright and dark sides of the metropolitan city in this year’s exhibit.

In addition to renowned artists, the Seoul city government said it depended heavily on citizen participation for this year’s photo festival.

Part two of the main exhibition will feature 500 submissions of historic shots of Seoul. In addition, the exhibits will include one section dedicated to the public’s records of recent historical events in Seoul and another dedicated to personal histories and narratives.

“These photos will not disappear after this exhibition,” the Seoul Metropolitan Government said in a release. “They will be constructed as an archive for each district in Seoul, and will become a foundation for forming village communities, as the photos will be used for the research and cultural content of each district.”

* The exhibition runs through Dec. 30. Admission is free. Exhibits will be open from 10 a.m. to 8 p.m. on Tuesdays through Fridays. The closing time will be shortened to 6 p.m. on weekends. All the venues will be closed on Mondays. For more information, call 070-8240-9902 or visit www.seoulphotofestival.com