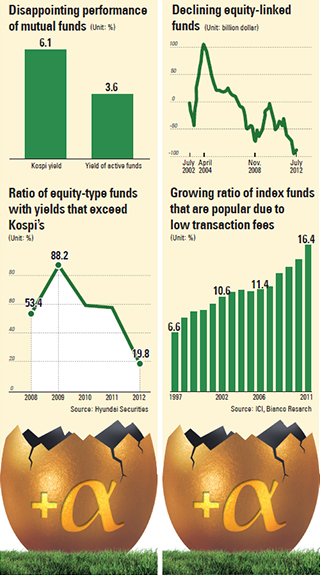 Is the sun setting on equity investment funds? This question surfaced amid the sluggish global economy with the news that Goldman Sachs Asset Management is pulling out of Korea just five years after entering the market.

Niklas Ekholm, a London-based spokesman for Goldman Sachs Asset Management, said in a separate statement on Tuesday that “our expectations for the local Korean asset management business have not been met.”

Earlier this month, the abrupt departure of Koo Jae-sang from Mirae Asset Global, which he helped found and where he formerly served as vice president, came as a shock to a market once famous for its high yields.

Along with the Chairman Park Hyeon-joo, Koo is credited with opening a new era for the country that has seen Korean investors attracted to equity investment funds.

However, Goldman Sachs’ exit has cast a shadow elongated by rumors that other foreign asset management firms are preparing to follow in its footsteps.

The sluggish global economy has also taken its toll on Samsung Asset Management, the No. 1 player in the domestic market, with Kim Jung-sung, its chief investment officer for equities, quitting this month.

Kim, a former fund manager of the Government of Singapore Investment Corporation, joined Samsung in March 2011.

“Many asset management firms have almost reached their limit due to the anemic state of the mutual fund market,” said an industry source, who asked not to be named. “There has been a lot of bad news recently suggesting that the restructuring of the domestic industry has only just begun.”

At Samsung, Kim attracted 1 trillion won ($915 million) from investors looking to hit the jackpot by pouring money into equity funds. But of that total sum, 521.7 billion won was withdrawn this year alone as investors remain skeptical about the gloomy market.

With more investors opting to withdraw their investments by terminating their accounts to hedge against further losses, this has led to lower profits at asset management firms.

According to the Financial Supervisory Service, 34 out of 82 such firms posted deficits in the first half.

The mass withdrawal was triggered by the disappointing returns of so many equity funds. Among domestic equity-type funds, only 19.8 percent produced Kospi-beating yields, the lowest level since 2008, when the economy was hit by the U.S. subprime mortgage crisis.

The average yield for “active funds” was 3.6 percent, much lower than the Kospi’s 6.1 percent. Meanwhile, installment savings-type funds were only half as popular in September as they were in June 2008, with the number of accounts plummeting from 15.7 million to 8.4 million.

Total investment in public equity funds slipped to 115 trillion won as of the end of October, down from 168 trillion won in the same month in 2007.

Similar trends can be seen elsewhere around the world.

Fund investments as a share of British households’ financial assets plunged to 7.8 percent this year, down from 11.9 percent in 2006, according to the Financial Times.

Many households have moved their money to safe havens such as insurance, pension and bank accounts.

“Individuals’ tolerance for investment risks changed with the start of the global financial crisis,” said Yu Jae-hong, chief portfolio manager at AllianceBernstein. “As what looked like a rosy future got turned upside-down, their interest in equity-type funds evaporated.”

Some experts fear the winding down of interest.

“Equity-type funds are the most efficient tool for indirect investment,” said Kang Shin-woo, CEO of Hanwha Asset Management. “Arguing that their goose is cooked is simply not correct.”

Saumil Parikh, a portfolio manager at the world’s largest mutual fund firm Pacific Investment Management Company, forecast on Tuesday that equities will return an annualized rate of between 4 percent and 5.1 percent over the next five to 10 years.

John Bogle, co-founder of the Vanguard Group, said in an interview with CNBC in October that there is up to a 90 percent chance that stocks will post greater returns than bonds over the next decade.

“The fundamentals are that bonds are yielding maybe 2.5 and 3 percent if you throw in some corporates, and stocks are yielding 2.2 percent in the S&P,” Bogle said. “Yet the S&P stocks are going to have earnings growth. There’s nothing extra the government can do or the bond issuer can do other than pay the agreed-upon coupon.”

Meanwhile, individual investors who hold fund accounts with Goldman Sachs Asset Management seem to be reacting relatively calmly to Goldman’s announcement that it is shutting down its Korean operation.

“We get fewer inquiries from customers about Goldman’s departure than we thought,” said an employee at KB Kookmin Bank, which sells equity-type funds created by Goldman Sachs.

According to the Korea Financial Investment Association, Goldman Sachs manages a total of 5.16 trillion won of assets. Of this, about 4 trillion won is invested in bonds, it said.

According to industry insiders, Goldman Sachs is likely to terminate some of its funds while other accounts will be transferred to other asset management firms.

Those individual investors who are not happy about having their accounts automatically transferred can withdraw their funds.

Some market observers see Goldman Sachs’ departure as a grand opportunity for other asset management firms as it potentially frees up 4 trillion won of institutional investments for the taking.

This sum mostly comprises investments by insurers and companies that deal with pension plans - and all of it will have to be transferred to rivals.