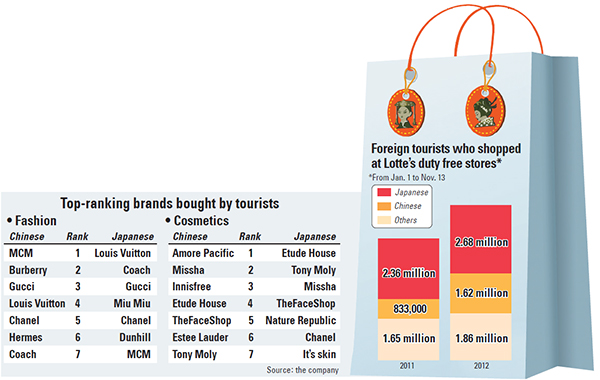 Chinese tourists have purchased more products by luxury Korean brand MCM at local duty-free stores this year than by rival Louis Vuitton, their favorite in 2011.

The French fashion house slipped to fourth place while MCM climbed from No. 7 to No. 1., according to data supplied by Lotte Group. 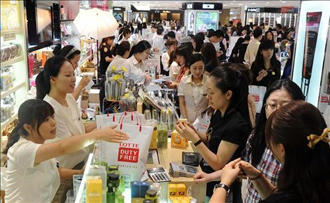 Lotte Group’s duty-free business recently released a study of consumption patterns by analyzing purchases by the six million tourists who shopped at its stores this year as of Tuesday.

The Lotte report is currently the largest and most accurate available in Korea, as this group of buyers accounts for 60 percent of the 9.47 million tourists that visited Korea in the first 10 months of the year.

Moreover, Chinese are making up more of the total spending by non-Koreans. Last year, some 833,000 Chinese tourists shopped at Lotte’s duty-free stores as of November, but this has doubled to 1.6 million in 2012, making them second only to Japanese shoppers (2.68 million).

MCM’s sudden jump in popularity is surprising considering that most of the luxury goods bought by the Chinese were foreign brands, including Burberry, Gucci, Chanel and Hermes.

Chinese bought 790 percent more MCM products this year than last, while Japanese snapped up an extra 150 percent. The most popular item was one of the brand’s backpacks.

“As we entered the Chinese market in 2010, our brand recognition among Chinese consumers has gone up,” said Shin Hae-eun, head of MCM’s global marketing team. “Additionally, Chinese tourists are showing keen interest in items that are not available at stores in China.”

Japanese tourists still preferred European luxury brands over MCM, which ranked seventh among high-end brands that they bought this year. Louis Vuitton was No. 1, followed by Coach and Gucci.

In fact, Korean company Amore Pacific was more popular among Chinese than any other brand, Lotte data showed, with its YoonJo Essence the top seller.

Low-cost Korean cosmetics brand Missha ranked No. 2 among Chinese, while Innisfree, which didn’t even break inside the top 10, ranked third.

Japanese tourists also filled their shopping bags with Korean brand cosmetics as the top five brands they bought were all Korean. U.S. brand MAC was nudged out of the top 10, while LG Household and Health Care rose in its place.

Overall, sales of Korean products at the duty-free stores jumped 60 percent on-year. Chinese tourists were the main consumers, as demand from them rose 150 percent, while purchases from Japanese moved up 25 percent.